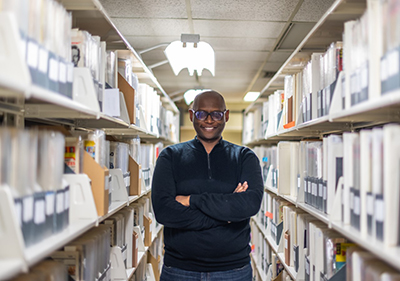 The Black History Month speaker series at Dalton State continues this year with a talk focused on the relationship between American culture and superheroes.

Dr. Julian Chambliss, professor of English and Val Berryman Curator of History at Michigan State University Museum, will discuss “Icons of Memory: Superheroes in an Asymmetrical World” on Tuesday, Feb. 25 at 7 p.m. in Health Professions, room 107. It is free and open to the public.

Chambliss will speak on how historical eras, like the Great Depression, became reflected in literary works and highlighted hopes and anxieties of urbanization experienced by the American population, said Dr. Seth Weitz, associate professor of history at Dalton State. The presentation addresses patriotism and paranoia and how superheroes are a window into political and sociological expectations in the United States, he said.

“Many don’t realize the films we see in theatres produced by Marvel Cinematic Universe and DC Comics are being studied by historians, political scientists and sociologists,” Weitz said. “To have a world-renowned scholar deliver a talk on our campus about this growing interdisciplinary academic pop-culture field is something the community will enjoy. This talk will provide our students and community a glimpse into how the academic world interacts with the pop culture world.”

Chambliss concentrates on multiple concepts that revolve around the urban experience. These concepts include how imagined universes in comic books create new realities based on American culture and current events, anxieties on the perceived future and an evolving narrative of the American experience.

He is co-editor of books including, “Assembling the Marvel Cinematic Universe: Essays on the Social, Cultural and Geopolitical Domains;” “Ages of Heroes, Eras of Men” and “Cities Imagined: The African Diaspora in Media and History.” He has a joint appointment in the department of history at MSU and serves in the Consortium for Critical Diversity in a Digital Age Research, which helps fund research and hosts projects on digital culture and diversity. Chambliss is also a producer of Every Tongue Got to Confess, a podcast series that highlights people of color.