Graduate Faces Pandemic in First Year as a Nurse 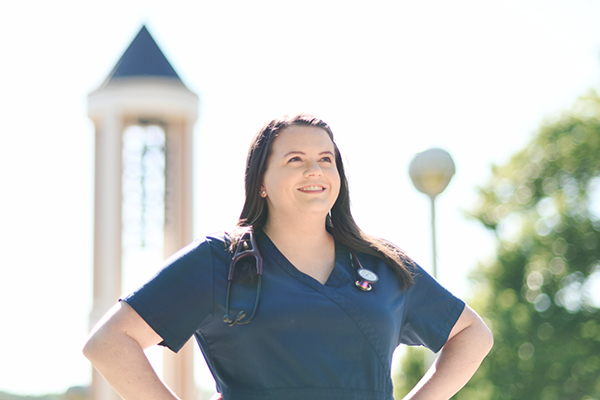 Tory Corley had already anticipated a challenging first year as a nurse, even before the pandemic.

She was only a few months into her career as a registered nurse when the new coronavirus (COVID-19) began to threaten the country, and even though it’s scary and daunting at times, Corley credits the rigor of Dalton State’s nursing programs for preparing her.

“Nothing could fully prepare me for something on this level,” Corley said. “But I was as prepared as I could be thanks to the professors at Dalton State. I’m glad we practiced properly donning and doffing personal protection equipment and to learn to stay uncontaminated. My life depends on that knowledge as does the life of my patients.”

Corley, who is originally from Alabama, wasn’t sure at first if nursing was her path. In high school she had an interest but knew it would be difficult. She initially attended a larger school and attempted two other majors before embracing her dream of becoming a nurse.

In 2014, Corley transferred to Dalton State, where her husband Michael Corley graduated.

“It took me a long time to figure out what I wanted to do,” she said. “I went into the ASN program and completed it in spring 2019 then went immediately into the RN to BSN program. I was afraid if I didn’t go straight into the RN to BSN program I wouldn’t want to go back because I’d be in my career and settled. I have plans to earn my doctorate and hope to go back to teach at Dalton State one day. Nursing education is my end goal.”

Corley wants to give back to the program that meant so much to her. When she entered the program, she was a mother to two young children, Amelia and Allison, who are now 5 and 3. While in the program one of her children broke her leg and Corley needed accommodations temporarily to ensure her success.

“The professors in the nursing program are so amazing,” Corley said. “Most programs are meant for people who aren’t juggling so many other responsibilities, but at Dalton State, I could always go talk to the professors. They heard me and worked with me. I liked that in the nursing program you felt like you were family, and the faculty and staff were dedicated to helping me.”

While a student, Corley showed she cared not only about her success but the success of her peers and the nursing program, said Dr. Lee Ann Williams, ASN program director and an assistant professor of nursing.

“I believe Tory touched us all in a special way,” Williams said. “Even though she took her studies seriously, she always had a smile, shared a 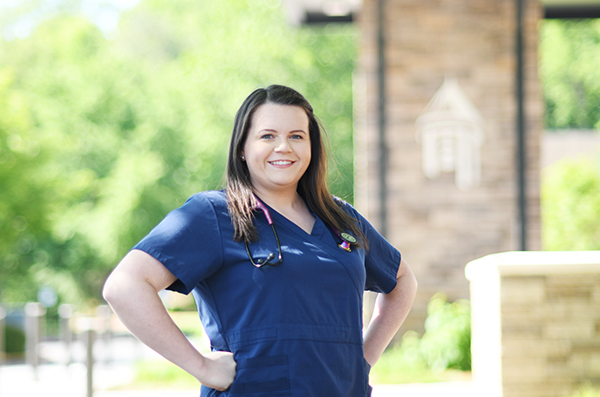 story and made us laugh. She had respect for everyone. She seemed genuinely interested in us as instructors, too and often asked how we were doing. She will be good in any role she chooses in nursing and in life.”

Corley was a student worker in the simulation lab while pursuing her associate degree. The simulation lab utilizes interactive and reactive mannequins controlled by computers that allow students to experience different scenarios in a safe environment before ever stepping foot into a healthcare facility. It was there the content taught in the classroom went from theoretical to practical. It was there Corley became confident in her abilities.

“Dalton State’s nursing program was really challenging, and that helps because nursing is challenging,” she said. “You learn how to get through hard times as a nurse because of the rigor of the program. In the sim lab you realize it isn’t real life but it prepares you for real life. You hear, ‘This is the place to make mistakes,’ and it was. You had to figure out things like medication doses quickly, and in the ER I do that on a regular basis.”

The simulation lab prepares students for life after graduation in a different way than clinical rotations do because in sim lab, the feedback is immediate and students repeat the scenario learning from mistakes, Corley said.

Even though the RN to BSN program is online, Corley continued to receive the same support from her professors she had received while on campus in the ASN program.

“For example, Lee Ann still sent out texts each week to see if we had questions or needed to meet in person,” Corley said. “You still get the support of being on campus even when you’re not there. Lynda Ridley was like that, too. In her class we had clinical hours interrupted because of the coronavirus, and she was sending us updates the whole time. I never felt stressed about it because they were there helping us.”

“It has been scary,” Corley said. “We went from everyday life to wearing masks and PPEs the entire shift. There’s always a constant threat. You’re always wondering if this is the person who has it. We treat anyone with respiratory issues at all as possible COVID cases. You don’t actually know how safe you are.”

Each patient is treated as if they may have coronavirus since some people can be carriers and asymptomatic. While Corley understands the seriousness of the virus and the need for social distancing, she, like many others, is growing weary of being in quarantine.

“I think the isolation and quarantine is the right thing to do,” she said. “It looks like we overreacted, but that means we are successful in flattening the curve. We’ve seen some COVID cases, but we haven’t been overwhelmed. We’re doing the right thing and making progress, but I’m nervous about a second wave.”