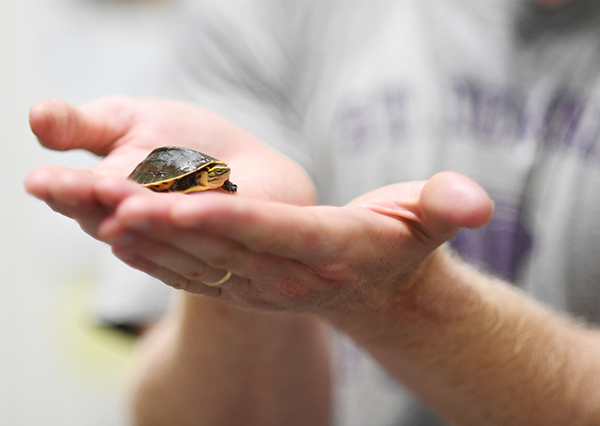 But the Southeast Asian box turtle, Cuora amboinensis, had not even been part of Dalton State’s Turtle Assurance Colony (TAC) for a year when a clutch of eggs was discovered. One turtle recently hatched from the clutch making it the first of its species to be born at the college.

The Southeast Asian box turtle is the fourth endangered species to successfully breed in captivity at the college. Other species that have been bred are the elongated tortoise, Indotestudo elongata; serrated hinge-back tortoise, Kinixys erosa; and the Home’s hingeback tortoises, Kinixys homeana.

“We added this species to TAC last October, but I didn’t expect anything to happen this soon because turtles need time to get acclimated,” said Dr. Daniel Gaillard, assistant professor of biology and a herpetologist specializing in turtles. “I wasn’t even looking for clutches of eggs from them yet and just happened to find them. We had a few other eggs, but so far this is the only one that’s viable.”

Nicole Sanabria, a biology student who is helping care for the Southeast Asian box turtle, is looking forward to learning more about the species and the hatchling. Students are responsible for husbandry duties, such as feeding the turtles, cleaning their cages and checking their shells and bodies regularly to ensure their health. This gives them hands-on experience handling and caring for animals that has led several students to obtain internships and jobs at aquariums and zoos.

“I am grateful to be on a team of people who love working with animals and helping with these conservation efforts,” said Sanabria, who expects to graduate in the spring and hopes to work in wildlife biology. “I have been working with these aquatic animals for less than a year, but I’ve learned so much about their mannerisms and how vulnerable their species is in the wild. My experience with the Turtle Assurance Colony means a lot to me.”

The Southeast Asian box turtle is found in highly aquatic, lowland areas ranging from Nepal and India to Myanmar, Malaysia and into the Philippines and other countries. They’re often found in rice fields, as well as streams, ponds and wetlands.

“They have a large distribution area, which is one reason I like this species,” Gaillard said. “Also, not a lot about them in the wild is known, though they’ve been studied in captivity.” 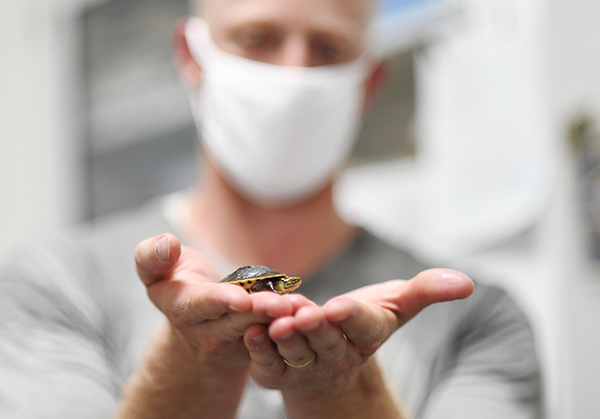 This species, as well as many species in Asia, are endangered because they’ve been over-harvested. They’re often sold illegally as part of the exotic pet trade or for food.

Gaillard has traveled around the world studying turtles and the illegal trade. Though the turtles are not native to China, the markets there are where he’s seen the Southeast Asian box turtle most frequently. It was while on a trip there he was drawn to this species because of its wide range, its unique pattern and because they’re not as shy as other species of box turtles.

“Enforcement on the illegal trade in China has improved, especially due to the pandemic,” Gaillard said. “It has helped species native to China, but American species are now in higher demand there. However, it’s harder to obtain them since travel is being restricted worldwide.”

If the pandemic allows, Gaillard has planned a study abroad trip for summer of 2021 to India to study this species of turtle. Students would be able to gain experience in the field with herpetologists. Gaillard is also working with other researchers to reclassify how the species is divided.