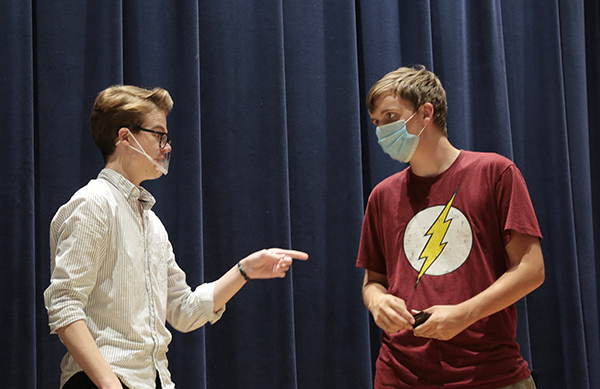 Theatre students at Dalton State are providing a much-needed break from the stress of 2020 with a performance of an original comedy this month.

Dalton State’s Department of Communication, Performing Arts and Foreign Language presents “The Foark River Tanning Salon and Bait Shop” Nov. 10-14 at 7:30 p.m. in the Goodroe Auditorium on Campus. General admission is $8, and tickets can be purchased through eventbrite.com. Seating will be physically distanced, and face masks are required.

This production is an original comedic play by Dalton State’s Dr. Barbara Tucker, Chair of the Department of Communication. It is a parody of reality TV shows and the ridiculousness of them. It follows the owners and employees of a southern bait shop and tanning salon as the owners try to turn their business into a reality TV hit with hijinks ensuing.

“I am so happy we are able to have a performance this fall despite Covid-19,” Dr. Kim Correll, director and assistant professor of communications and theatre said. “The students have been practicing great safety protocol and are thrilled to be back together and being creative.”

“I believe the arts are incredibly vital at any time, especially now,” Correll said. “Our hope is that people will come see it and have a good evening of laughter. I think we all need that now.”