From Film Studies Student to Entrepreneur 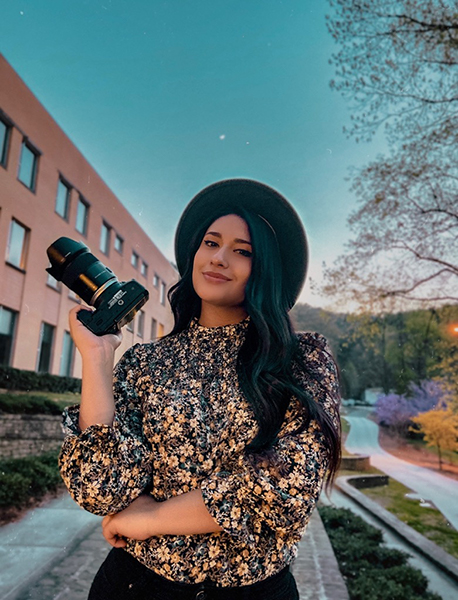 Jennifer Cruz’s passion for film and photography led her to Dalton State.

Now, it is inspiring her to launch her own video and photography business, Luna Studios.

“Dalton State has given me a lot of opportunities and allowed me to share those opportunities with other people,” said Cruz, a senior communication major expected to graduate in the spring.

After graduating from high school, Cruz was looking for ways to get more experience in film and photography. The timing was just right for Cruz, who enrolled at Dalton State the same year the college began offering a concentration in film studies.

“That’s what made me want to attend Dalton State, the fact that they offered film studies,” Cruz said. “But at first, I didn’t really know much about the concentration. I only knew it was an option.”

Cruz credits Dr. Barbara Tucker as the professor who helped set her on the right path and told her about the film studies concentration and the opportunities it provides through the Georgia Film Academy.

The Georgia Film Academy gives students in the University System of Georgia the chance to gain hands-on experience while earning credits toward their degree. Students take courses at a professional film studio in Atlanta where they learn practical skills like set design, lighting, special effects, make-up and more. The academy partners with Trilith Studios, formerly Pinewood Studios, production home to blockbusters such as Marvel’s “Avengers: Endgame” and “Avengers: Infinity War.”

“I didn’t want to just take normal classes. I wanted to get hands-on experience, so the concentration was perfect for me,” Cruz said.

While at Dalton State, Cruz started the photography and film club with another student, Diego Alvarado, to connect with people who shared her passion for film and photography.

“It was so impactful seeing the drive and motivation she had to make this something that all students interested in film and photography can enjoy,” Alvarado said.

Cruz says the photography and film club has allowed her to gain hands-on experience she would not have gotten otherwise. The club provides numerous services for Dalton State students and student organizations, including collaborating with career services to organize a professional headshot day and photographing events for various student organizations at the college.

Through Luna Studios, Cruz provides several professional services, including headshots, graduation and wedding shoots, promotional videos and more. But she admits she is happiest when she is doing creative shoots.

Cruz acknowledges it has been difficult to stand out in a saturated market but believes the challenge pushes her to be more creative.

“That’s one of the things I admire about the photography industry, that it is a little difficult to stand out,” Cruz said. “It’s not always easy when everyone is trying to do fall photo shoots, for example, but it gets you thinking about the business aspects. You have to ask yourself questions like ‘What’s my time worth’ and ‘how do I stay competitive?’”

Cruz has many aspirations for her career and brand.

“Luna Studios is my long-term goal, but after graduating, I’d still like to jump into the film industry. I’d love to work at a professional studio because my goal is to be a director of photography one day,” Cruz said.

To learn more about the film studies concentration or the Georgia Film Academy, contact Dr. Tucker at btucker@daltonstate.edu.