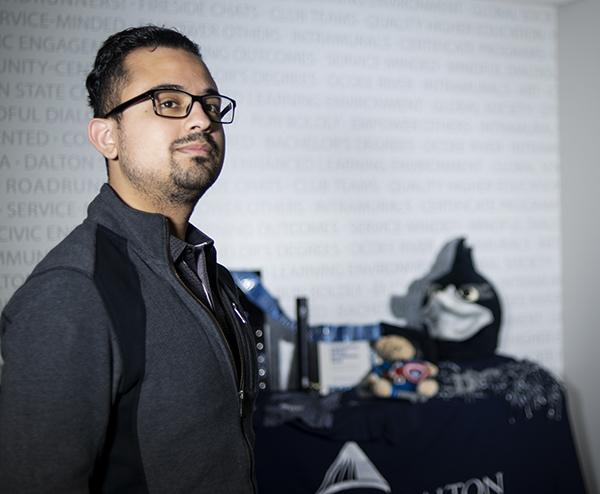 Diego Alvarado watched from an apartment in a foreign country as life seemingly moved on without him.

For years Alvarado waited. Waited for news his life would get back on track. Waited to return to the only home he’d ever known. Waited to rejoin his family.

“Everyone moved on, and I lost a lot of people slowly from my life during that period,” Alvarado said. “I couldn’t move on. There was nothing I could do. I had my life stolen from me. As a young adult I was supposed to be enjoying the best years of my life, but my life was on pause. That was what really grew the resentment.”

Alvarado had come to America at 6 with his family, grew up in Dalton, went to Southeast High School. But about a month after his 18th birthday in 2011, he had to leave for Mexico due to his immigration status.

The day he had been waiting for finally came in May of 2015. He was approved to return to America as a permanent resident. He was still bitter, still struggling with the years he’d lost in Mexico.

But all that changed at Dalton State, where Alvarado enrolled as a student to begin spring semester in 2016.

Alvarado graduates this semester from Dalton State with a degree in communication. During his time as a student, he was heavily involved as an orientation leader and a student ambassador and was active in athletics and in student life.

He grew. He evolved. His life was transformed.

“Dalton State got rid of the bitterness,” he said. “Dalton State got rid of that resentment. I realize being in Mexico during that time didn’t take my life away from me. It gave me life. It got me to the life I had dreamed of. Those four years were what I needed to put me exactly where I am today. Without that delay, I wouldn’t have the people I have today. Now I know it was exactly where I needed to be.”

Alvarado was hired as an enrollment specialist at Dalton State this semester, and he’s glad to continue giving back to the college that turned his life around.

“Diego represents all Dalton State stands for,” said Dr. Margaret Venable, president of the college. “Some would say he is lucky to have attended Dalton State. But I believe Dalton State is luckier to have Diego as part of our family. His contributions to Dalton State, to our current and prospective students and to our employees is inspirational. He told me once he wants to be president of Dalton State, and I never forgot it. Someday, he will be the best president Dalton State has ever had.”

Alvarado’s family had arrived in America on July 4, 2000. He doesn’t remember much of his journey or his early childhood in Mexico. 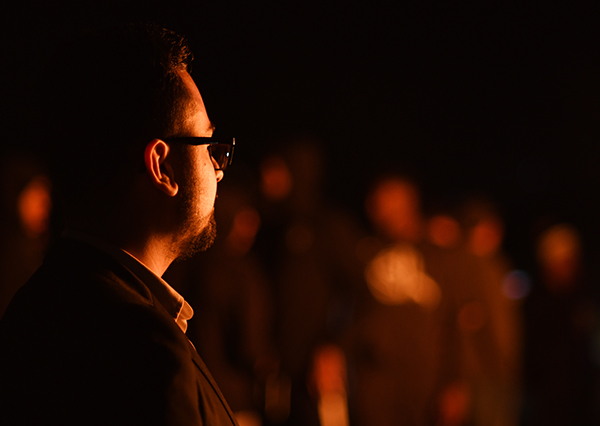 “Anytime my mom talks about the multiple things they had to endure to get here, I realize it was the ultimate sacrifice anyone could make,” he said. “There’s no way I won’t try my best for them. The reason I want my bachelor’s degree, my master’s and maybe a doctorate later is because it’s incomprehensible to put yourself through what they did for your children.”

Shortly after Alvarado turned 18, in December of his senior year of high school, he had to return to Mexico with his family as they fought the immigration system. He was able to complete his requirements to obtain a high school diploma before he left, and he hoped to be back in time to walk across the stage with his class that spring.

“My story is, like so many others, the immigration system takes its sweet time,” Alvarado said. “Even now, I’ve applied for my citizenship, but I was told there wouldn’t be any progress on my case until at least September 2021.”

Alvarado and his parents lived in a suburb on the desert. They had to walk for miles because they didn’t have a car or close access to public transportation. And after the sun went down, anyone still out was in danger because of the violence in the area.

“I didn’t work. Didn’t go to school. Didn’t do anything,” he said. “I stayed home. I got on my computer. I expected this to last only four to five months. At any point, I could have received a notice for an appointment for my immigration hearing. I wasn’t normal for the culture there because America is my home. That made me a target. It was extremely dangerous for me to get a job. So, I waited. From December 2011 until spring 2014, I was literally just waiting on immigration to update us.”

After 3.5 years of waiting, Alvarado received news his case was denied, and he would not be able to return home. His parents had already received permanent residence status and had returned to Dalton. So now Alvarado was alone.

“At this point, I am stuck in Mexico,” he said. “I cannot legally come back no matter what. I had a few options. I could come back and stay illegally, stay in Mexico or emigrate to another country. We ended up appealing my case. I’ll always be grateful former Congressman Tom Graves wrote a letter on behalf of me for my appeal. And I was back to waiting for an update on my status. By that time, I was so jaded I didn’t care.”

The appeal worked. In January of 2015, Alvarado discovered he would have one chance to return home. He would go for an interview in May, and his entire fate rested in that one person’s hands. He dedicated the next four months to learning how to present himself, how to advocate for himself, how to behave and how to be likable and charismatic.

“Everything I had in me, I put into this one day,” Alvarado said. “I cannot put into words what I wanted. I played Eminem’s ‘Lose Yourself’ to put me in the right place mentally.”

As a 21-year-old, Alvarado was approved to return home as a permanent resident who would be eligible for citizenship in five years.

“When I came back it was happiness of the purest form,” he said. “I had spent from 18 to 21 in Mexico waiting. I was happy to come home, but that resentment and bitterness was still strong. People usually don’t get a full clean slate to start over, but I did. My next objective was clearly college.” 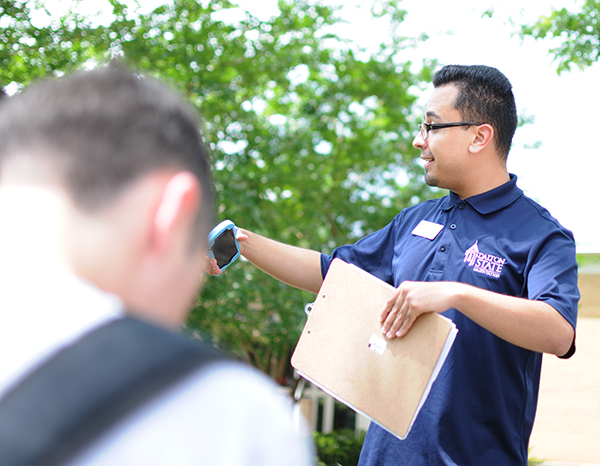 Alvarado took some time to acclimate to life back in America. Then, he enrolled to begin at Dalton State in January of 2016.

“Orientation changed my life,” Alvarado said. “I went to orientation in December of 2015, and here were these students that were helping incoming students and fully being themselves. They were laughing and enjoying life. I gravitated toward that. In Mexico, I just wanted a second chance. I was fully invested in who I wanted to be. I loved helping people. It is a passion of mine. A former student, Ana Mendez, helped me register for classes, and she did not leave my side. What she did and showed me, I wanted to do and give to others what she gave me. She gave me attention and helped me create my first semester of college. Everything I did while at Dalton State was because of that moment and that day.”

Alvarado applied to become an orientation team member that January. That decision became pivotal to his career as a college student. He spent the next four years introducing incoming students to what it means to be part of the Roadrunner family. He gave them tips, helped them decide on classes, mentored them and was a positive, supportive presence on campus.

Alvarado connected with the faculty and staff. He made an impact. He touched the lives of thousands of people in his role as an orientation leader. While later also serving as a student ambassador, Alvarado represented Dalton State to high school students touring the college. He served on the Student Government Association and assisted several students with beginning student organizations on campus, including the photo/film club.

“Diego has not only been the face but also the heart of all things Dalton State,” said Katelyn Humphrey, assistant director of recruitment and orientation. “When I step back to look at the orientation program at DSC - how we have grown and learned and changed and laughed together - there isn't a single moment worth noting that isn't somehow infused with who Diego has been to our team. Diego has impacted hundreds of students all across Dalton State. He is recognized everywhere he goes for the impact he has had as an orientation leader and a student ambassador; he has been responsible for making Dalton State a home to so many.” 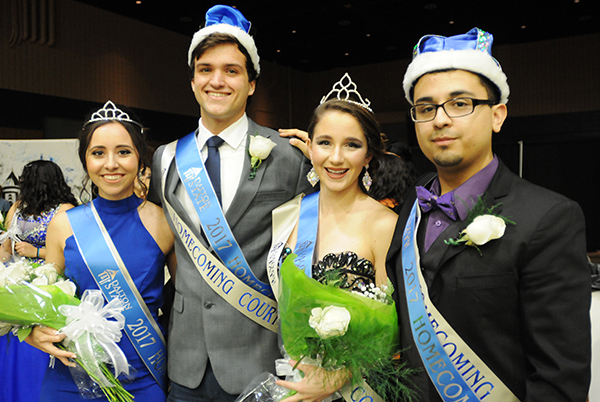 Alvarado was on the homecoming court and was elected prince as a freshman. He was also the person inside the Rage mascot for a period of time. He danced on the sidelines at basketball games wearing the Rage suit and made public appearances as Rage. He also spent time in the student-led spirit club, waving giant Roadrunner flags at basketball games and engaging spectator participation. His involvement in athletics hasn’t stopped yet. He now serves as the announcer at home soccer games.

“I felt like I was everywhere and doing everything,” Alvarado said. “That’s because of what I went through. I was no longer afraid. I had already talked to a single person who decided the fate of my life. What else was there to fear? Those four years I spent in isolation made me want to be around people and involved in everything I could take advantage of.”

“Diego is Mr. Dalton State,” said Dr. Jodi Johnson, vice president for Student Affairs and Enrollment Management. “I have known him since he started on the orientation team. Diego’s enthusiasm for Dalton State is unrivaled. He seizes every opportunity to talk about Dalton State. I am so grateful he was leading the student orientation group this year during this unusual and difficult season.

“Like so many of our students, Diego had a difficult and circuitous path to Dalton State,” she said. “His personal story is so powerful, and I believe it resonates with so many prospective students who think higher education may not be achievable for them. For many years, Diego said he was never leaving Dalton State, and now he doesn’t have to because we were fortunate enough to hire him full-time. I have heard Dr. Venable introduce Diego as the future president of Dalton State, and I believe a few years down the road he might just achieve this.”

In his position at the college, Alvarado helps incoming students and their families understand all that is available to help them. Before enrolling, he didn’t realize all the financial aid and other opportunities Dalton State provides to help students succeed.

“Anytime a Hispanic mother comes in, I see my mom, and I see what I wish she had been able to do for me,” he said. “I want to use that to help others. What I want to do is change the way people look at financial aid and empower them. I want to educate and grow this knowledge, especially for people with undocumented parents. You can still go to college. You can still get financial help. You can do it. I’m excited for them, and I’m excited to help them.”