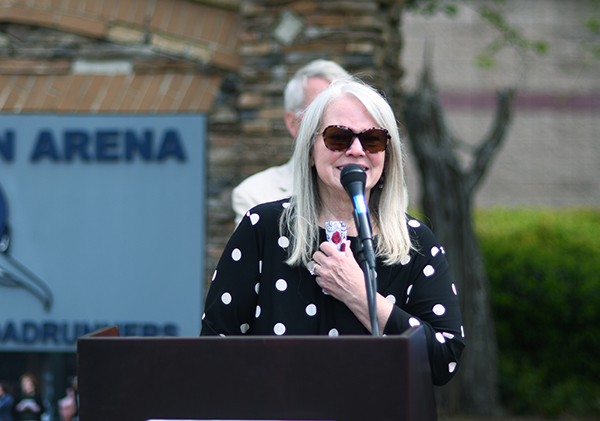 With tears in his eyes, the legendary Roadrunner basketball Coach Tony Ingle once spoke about the love he had for Dalton.

“I get emotional,” he said in a 2018 interview. “When I talk about our community… it’s very difficult. I love this town. I love these people. I love them because life is an echo. They started loving me and taught me so many valuable lessons.”

On Monday, the community once again showed how much they loved Ingle and appreciated his contributions to the area, which were far beyond the basketball court. Ingle died in January due to complications from COVID-19.

Dalton State College partnered with the city of Dalton to host a celebration of Ingle’s memory. The road in front of the Dalton Convention Center where the Roadrunners play will now be known as Tony Ingle Parkway. And the college announced the Tony Ingle Memorial Basketball Scholarship, which was begun by Ingle’s childhood friends.

Lamar McClure, president and CEO of Escho, was instrumental in creating the scholarship. He had known Ingle since elementary school.

“He said the only thing worse than death was being forgotten,” McClure said. “As for me, and Tony’s many friends, we will not let him be forgotten. The scholarship was something I know he would approve of. He always sought to help others and in this, he will continue to do just that. Tony was more than a basketball coach. He was a teacher who taught with a mixture of discipline and love, an encourager who made men from boys, and made them believe they could do better than they ever imagined. He was a champion.”

Ingle was born with a face deformity and grew up poor. He often told a story about finding shoes to play basketball in a dumpster. His childhood was full of challenges, but he continually found ways to overcome them, McClure said. 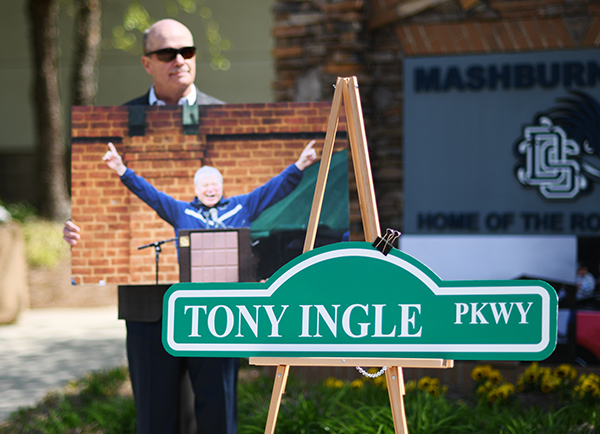 Ingle played basketball for North Whitfield High school and later for what was then Dalton Junior College. He received a life-changing scholarship to play at the college level for the Roadrunners.

“Tony was very appreciative of his scholarship,” McClure said. “He was the most exciting basketball player I’ve ever seen. I’ve never seen more score tables get wiped out going for a loose ball. He knew if he was going to get anywhere it was through basketball. He was not a musician. He was not a scholar. But he had basketball.”

During the 2018 interview, Ingle expressed his appreciation for the scholarship he received from Dalton Junior College.

“Coach Melvyn Ottinger gave me one scholarship,” he said. “I parlayed it into whatever little success I’ve had along the way. I’ve always wanted to give back to the community and what a blessing it was to come back here as the coach. I had high dreams and goals, but I always wanted to do it the right way, by never sacrificing any principles.”

The first recipient of the scholarship will be announced at the Roadrunner’s first home game in the fall.

“We invite you to join us in giving to this special fund,” said Dr. Margaret Venable, president of the college. “In creating a permanently endowed fund like this, Tony’s friends have created an eternal legacy to honor him and make sure his impact at Dalton State is never forgotten. This endowed scholarship fund serves as a reminder to future generations that Tony Ingle was beloved by this community and his alma mater. Future basketball players will feel his influence over their lives. Tony knew firsthand the struggle college students often face.”

More than three-fourths of Dalton State’s students receive financial aid, and two-thirds of graduates complete their degrees without student loans.

Ireland was first a student assistant for Ingle at Kennesaw State then came to Dalton State as his assistant in the 2017-2018 season. He has served as head coach since Ingle’s retirement in 2018.

“To know Coach Ingle as a coach is to know him as a man,” Ireland said. “He is a very good man, very humble, very easy going, treats everyone the same but also makes everyone feel special. It’s incredibly special to me to see him honored. It was hard not to be able to remember him the way we wanted to because of COVID-19. But today we are able to.” 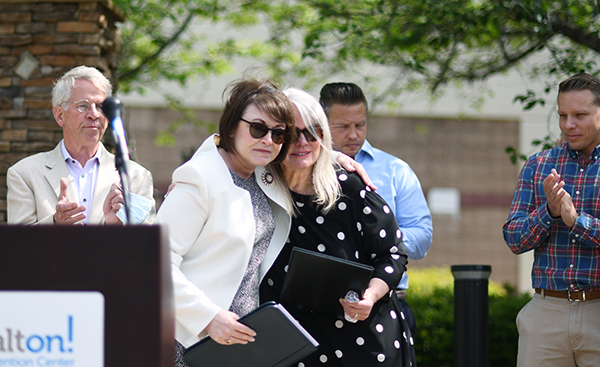 Ingle became a successful coach for several high school and collegiate teams before leading the 2015 Roadrunners to the NAIA National Championship in the team’s first year of eligibility. Ingle served as head coach at Dalton State for nearly six years before retiring, having built an impressive 134-33 record during his five-season run. He led the Roadrunners to two conference championships in addition to the 2015 NAIA National Championship.

Ingle was a motivational speaker, an author, active in the Church of Jesus Christ of Latter-day Saints and was known for his inspirational – and often, comical – sayings.

Ingle was recognized Monday for his ability to teach young men, not just on the court, but how to be better citizens and upstanding men.

Payne shared a resolution that was passed and presented during the General Assembly earlier this year honoring the memory of Ingle for his positive impact on the state of Georgia. The resolution mentioned Ingle’s time coaching at Gordon College, Brigham Young and Kennesaw State. He acknowledged Ingle’s “servant’s heart” and spoke about how truly and wholly he loved others.

Reed Dungan’s life was changed because of the impact Ingle had on him. He was glad to see Ingle’s legacy honored in such a large way. Dungan first met Ingle at a basketball camp at Kennesaw State when he was a child and knew then he wanted to play college basketball.

“He’s truly where I got my start and the love of the game,” said Dungan, a 2019 graduate of Dalton State who played for the Roadrunners. “It came full circle in the end and I got to end my career playing for him.”

Dungan is now an assistant basketball coach at Hiram High School where he was a standout player. He also coaches a fourth-grade team.

“Coach Ingle was what I needed at the time,” Dungan said. “And I try to be that for the kids I coach now. He taught me so many life lessons, not only about being a better basketball player, but about being a better man. Some people come into our lives that change our lives. He truly changed mine, and I think he saved my life. I love him, and if he could be here today I would give him a big ole hug and tell him I love him.”

Jeanne Ingle thanked Dalton and expressed how much her late husband loved the community.

“To me he’s with me forever,” she said. “Thank you for the love and support you’ve given Tony. You’re just such a big part of his life and a big part of our lives.”