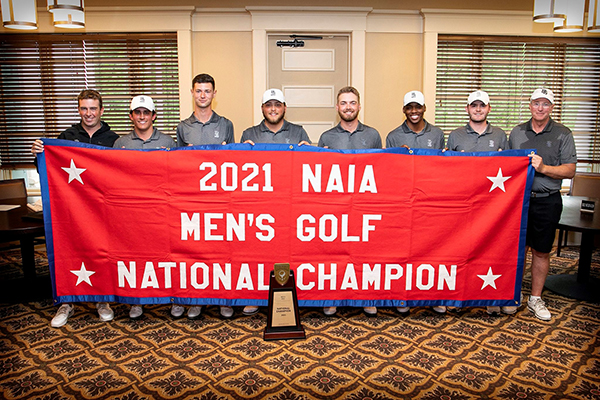 Ben Rebne stepped up to the green on the 18th hole on the final day of the NAIA Men’s Golf National Championship Tournament in Illinois. It was the moment he had been dreaming of.

A single, long, 20—foot putt would win the tournament for the Dalton State Roadrunners.

“It’s hard to describe because when you’re in a moment like that, something with that magnitude happens to you, you kind of black out,” said Rebne. “I don’t have much recollection of the putt itself. Every young golfer has a dream like that, a long putt to clinch the victory.”

Rebne remained calm and focused and let the years of training as a golfer take over. His successful putt gave the Roadrunners their first ever national championship in golf.

“I knew it was going to go in,” he said. “I knew what I had to do. I knew if I missed it we’d go into a playoff. As soon as I stood over the ball I don’t remember anything really. It’s so surreal to get to stand up there and accept that trophy and pose behind that red championship banner for photos.”

Rebne tied for second place individually, shooting an even-par 71 in the final round. Other team members competing in the tournament were Steve Kibare, Trevor Bassett, Matthew Cleary and Joshua Stern.

“I could not be prouder of this group,” said Coach Ben Rickett. “They have dealt with so much adversity all year and hung in there with the weather the last six holes. What a storybook ending for Ben’s college career, to make such a putt and win the national championship, especially after the disruptions a global pandemic caused for the team. I can’t believe we’re the national championship team.”

Rebne wrapped up his senior year a few weeks ago. He majored in business management and is now looking at golfing professionally. He credits Rickett and Dalton State for that opportunity.

“It has been incredible,” Rebne said of his time as a Roadrunner. “I wasn’t that great of a golfer, and I wasn’t a team leader in the slightest. Coach Rickett turned me into a good golfer and a good leader. The Roadrunner family is something that’s hard to explain to people. It’s something you don’t get very often.”