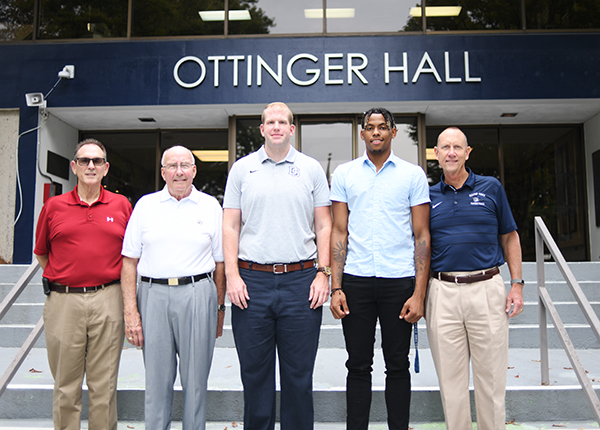 Franklin Almonte, a freshman basketball player at Dalton State, is the first recipient of a scholarship in memory of legendary basketball coach Tony Ingle.

Almonte, originally from the Dominican Republic, graduated from Dalton High School and was a local basketball standout, having been named Player of the Year by the Daily Citizen-News two consecutive years.

Almonte recently met with Ingle’s friends, Larry Harrison and Lamar McClure, who were instrumental in creating the scholarship. They shared Ingle’s story with Almonte and explained the reason for the scholarship.

Ingle, a Dalton native who died of COVID-19 in January, was born with a face deformity and grew up poor. He received a life-changing scholarship to play at the college level for the Roadrunners at what was then Dalton Junior College.

Ingle later served as head coach at Dalton State for nearly six years before retiring. He led the Roadrunners to two conference championships in addition to the 2015 NAIA National Championship.

Almonte will be recognized before the first home game on Tuesday, Oct. 26 at 7:30 p.m. at Mashburn Arena. Tickets and a full schedule are available at dsroadrunners.com.