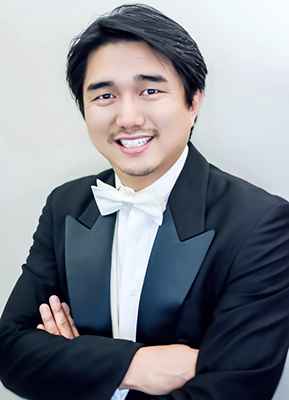 Dalton State’s Concerts on Campus series is returning next week following a hiatus due to the pandemic.

Yuman Lee, baritone, and Jerico Vasquez, piano, will perform “Gagok and Songs of Travel” on Monday, Oct. 18 at 7:30 p.m. on campus in the Goodroe Auditorium. The concert is free and open to the public.

The performance will feature a collection of Korean art songs, along with Ralph Vaughan Williams’ Songs of Travel.

“As a performer myself, I’ve missed live concerts in every way since March 2020, and I know so many others have too,” said Dr. Ellie Jenkins, an associate professor of music who organizes the concerts. “We’ve hoped to be able to resume Concerts on Campus for over a year now, so I’m pleased that we’ll be welcoming guest artists to our space. Interestingly, our first concert back includes Jerico Vasquez accompanying Yuman Lee in a program of art songs. Vasquez was our final performer before the pandemic halted our concert series.”

There will be another concert, Gypsy at Heart, on Thursday, Nov. 4 at 7:30 p.m. in the Goodroe Auditorium. The concert features a fusion of eclectic musical genres from East Indian Ragas and Middle Eastern scales, to Latin, Celtic, European classical and American folk and jazz. It is also free and open to the public.