Franklin Almonte grew up playing basketball on the streets in jeans and no shoes.

He didn’t grow up with much, but he learned grit and tenacity and how to work hard, skills that have made him a standout basketball player.

Almonte’s story is not so different from that of the late legendary Coach Tony Ingle, who often told about having to find shoes in a dumpster because his family was so poor.

Their stories are generations apart, begin in different countries, but still parallel one another.

Almonte grew up in the Dominican Republic and came to Northwest Georgia as a teen. He became a standout on Dalton High School’s basketball team and hoped college was his next step, but he would need financial assistance.

Just like Ingle, Almonte’s journey brings him to Dalton State as a young, enthusiastic basketball player, who is grateful for the chance to play and a chance at a college education. It is fitting Almonte received the first ever Tony Ingle Memorial Scholarship this year, which was created after the former Dalton Junior College player and Roadrunner coach died earlier this year. 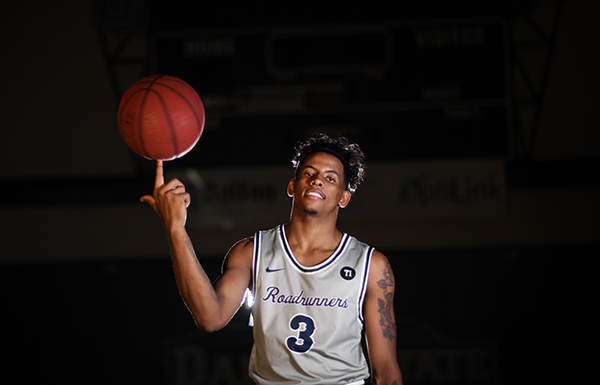 Almonte takes to the court for the Roadrunners season opener on Tuesday, Oct. 26 at 7:30 p.m. at Mashburn Arena. The team will be wearing jerseys that pay tribute to Ingle’s memory.

“To know Coach’s story, and to know Franklin’s story, there are so many similarities in their upbringing and the way they grew up,” said Roadrunners Coach Alex Ireland. “Giving the Tony Ingle Scholarship to a Dalton resident means a lot already. Then to give it to someone like Franklin who went through some of the same trials and tribulations, means even more. Coach received a life-changing scholarship to play college basketball, and to be able to pay that forward to a young man in a similar situation is very special.”

Almonte, an elementary education major, moved to the United States when he was 13 without knowing English. The school he attended provided him with a translator and someone to help him learn English.

“It was tough; it was hard,” Almonte said. “You are listening to a bunch of people and don’t even know what they’re saying. I had wanted to come to the U.S., though. I was expecting a better environment than I grew up in. I expected no violence like there is in the Dominican Republic. There is a lot of violence in the area where I grew up. It was just bad. There were robberies, deaths. It’s not a good environment for children. I feel more secure here. My family didn’t have a lot to provide in the Dominican Republic. I lived with my mom and three brothers, and it was a hard situation there.”

Almonte decided to try out for the basketball team in eighth grade.

Almonte stepped up as a leader on the basketball team at Dalton High School. He was named the Daily Citizen-News Player of the Year twice and surpassed 1,000 points and 1,000 rebounds during his high school career. 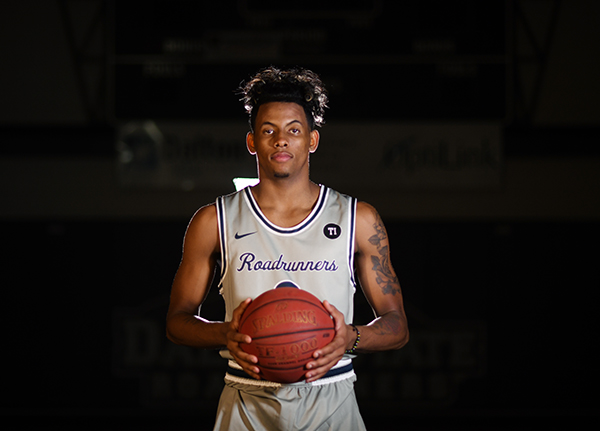 “People have told me I have natural skills,” he said. “I don’t look like a rebounder, but I’m good at it. It’s fun. Being part of a basketball team is like having another family. You share sad moments, happy moments. It feels good to have people that support you and want you to win and succeed, too.”

Almonte wasn’t sure college was going to be a possibility. He had spoken to recruiters at a few junior colleges but held out in hopes for a chance to play basketball for a four-year school. That’s when Ireland approached him about a place with the Roadrunners.

“It means a lot to me that I am a part of the Roadrunners team,” he said. I have always wanted to be a college basketball player, and I’m really excited for our first game. I am grateful I was given the opportunity to have the Tony Ingle Scholarship. I didn’t know Coach Ingle, but I have heard about him. Our stories are similar. It’s interesting. I take a lot of pride in it.”

This season will be the first time since before the pandemic the Roadrunners will play for in-person fans. After playing on campus in Bandy Gym for a year, they return to Mashburn Arena.

“I’m really looking forward to having fans back,” Ireland said. “Getting to have Roadrunner Nation and the people who have supported us for so many years back into Mashburn is exciting. This is a fun group of guys, and I’m looking forward to seeing them interact in a game together. We have a lot of really good players and good young men.”