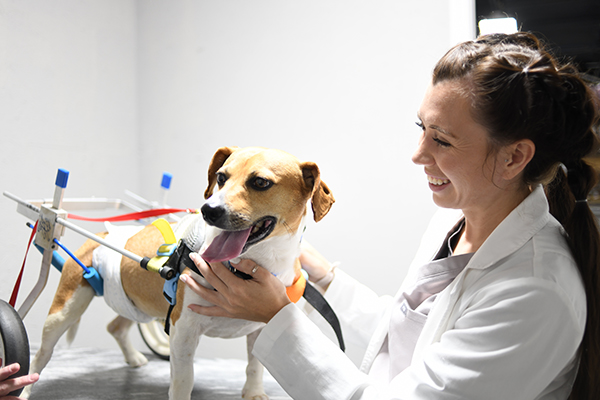 Megan Preston was working at an animal shelter when it all came together for her.

“We would have people bring in an injured animal thinking they had no other option than to drop off their animal at the shelter,” Preston said. “But a lot of times, it ended up being a minor wound. We would clean up the wound and tell them they could do this and this and everything will be OK. To see people light up and know everything was fine and they could keep their pet, that’s when it clicked.”

Preston decided to become a veterinarian.

“Obviously, I’ve always loved animals,” said Preston, a 2015 graduate of Dalton State College. “But I realized I love the owners. I love the connection people have with their animals. I do it more for that emotional attachment. I want owners to feel comfortable, to trust me and tell me anything they need to without fear of judgment. I always think of the owners when I am treating their pets.”

Preston is one of two graduates from Dalton State’s biology program who have returned to Dalton as a veterinarian. Preston practices at the Animal Hospital of Whitfield County.

They both began working as veterinarians full-time earlier this year. Their time at Dalton State prepared them for veterinarian school and for their careers.

Preston, a 2008 graduate of Murray County High School, was a nontraditional student, working full-time while balancing college. Faith, a 2010 graduate of Southeast High School, entered college after high school with an interest in the medical field but unsure of which path she wanted to take.

“I did not know I wanted to go into veterinarian school until my third year at Dalton State,” Faith said. “My grandparents told me to figure out what I wanted to do because I couldn’t keep going to school. So, I started volunteering here at this animal clinic, Dalton Animal Care South, and I fell in love.”

Faith was accepted into the veterinary school at Auburn University and is now licensed to care for both large and small animals. She is also pursuing a license to practice acupuncture on animals to help with pain, anxiety and behavior, as well as medical issues, such as epilepsy or renal disease.

“My comparative anatomy classes at Dalton State prepared me for the labs in vet school and learning the general anatomy of all kinds of animals,” she said. “Dalton State disciplined me. Vet school is like undergrad on steroids. So, I had to be prepared to study and work twice as hard. The professors love to help students and see them achieve. They want to see you do well so they will go above and beyond to help you.”

The late Dr. Richard Collison, a chemistry professor at Dalton State, mentored Faith and guided her toward Auburn’s vet program because that is where his daughter had attended. She added a chemistry minor just to take more classes with Collison.

“He made you strive to be a better person and do better for everyone around you,” she said. “You don’t know how much of your undergraduate studies are involved in your everyday life. In my vet profession, I have used more formulas from chemistry than I have anything else.” 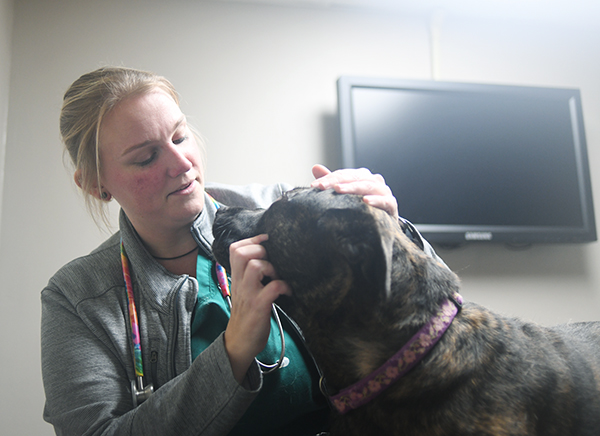 “It’s difficult to get in,” she said. “I was not a good student at the beginning of my undergrad, so it took a little growing up. I had to start taking school seriously and make it a top priority. After I graduated, I came back for a year to do some post-baccalaureate work and finish my research to help pull my GPA back up. Dalton State was like my second home. Dalton State was actually harder to me than vet school. It was harder to get into vet school than to actually get through vet school.”

After a year of post-baccalaureate work, Preston was accepted into Lincoln Memorial University.

“It’s important to embrace Dalton State,” she said. “Don’t just show up and go to class and go home. Become a part of the campus. You’ll get so much more out of it that way, and you’ll be more successful. Everyone helped me along the way. A lot of the professors were tough, which really opened my eyes. Others held my hand. I needed the mix of tough love and soft love to help me succeed.”

Preston studied kudzu with Dr. Gina Kertulis-Tartar, who is now the dean of the School of Health Professions. They used the plant to remove lead from the soil. This experience allowed Preston to present at conferences.

“We went to speak in front of professionals, experts in their field,” Preston said. “That prepared me to go on rotations at vet school because I wasn’t afraid of all these people who were experts and had been practicing as veterinarians for so long. I was able to embrace those experiences and really learn from them.”

Preston says if an animal can come through the door of her clinic, she can see it. She recently performed her first anesthesia on a snake and removed a mass off a guinea pig. But she is licensed for larger animals as well.

Preston and Faith were able to attend vet school without worrying about accruing additional student loan debt. Faith received the HOPE Scholarship and the Pell Grant, graduating from Dalton State with no student loan debt. Because tuition is so affordable at Dalton State, Preston was able to graduate with minimal debt.

“You can pay for an entire semester out of pocket from Dalton State,” she said. “That says a lot.”