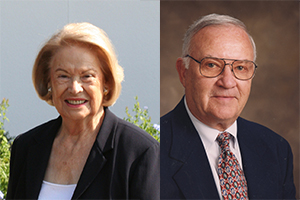 “The naming of an endowed faculty chair is one of the highest honors a college can bestow,” said Dr. Margaret Venable, president of Dalton State. “We approached the University System of Georgia’s Board of Regents last fall to seek approval for the James and Sis Brown Chair, and they shared our belief the Browns were deserving of this kind of recognition. We are so grateful for the Browns’ decades of commitment to Dalton State and to education throughout our community.”

“We consider James and Sis Brown to be two of the community catalysts for the half-century of growth at Dalton State,” said David Elrod, director of the Dalton State Foundation. “They served in various leadership roles on the foundation board off and on for more than 40 years, and they led by example with their extraordinary investments of time, talent, and treasure here that propelled the college forward in ways we all benefit from today.”

A native of Birmingham, Alabama, Mary Morris “Sis” Brown married James E. Brown of Dalton in 1949, and they co-founded Brown Printing Company in Dalton in 1958. She was Chairman of the Board of Brown Industries from 2003 until her death in 2017. Sis Brown chaired the college’s first-ever comprehensive fundraising campaign in 2006-2008 that raised more than $20 million.

James E. Brown was a native of Dalton and served as chairman of the ten operating companies of Brown Industries until his death in 2004. He was a Charter Trustee of the Dalton State Foundation in 1967, and a member of the University System of Georgia Board of Regents from 1987 to 1994.  He was a driving force in the effort to change the college from a two-year school to a four-year, bachelor’s degree-granting institution in the late 1990s. Brown Hall on the Dalton State campus was named for him in 2004.

Both Browns served multiple terms as Trustees and in leadership positions on the Dalton State Foundation board.

“It is a mark of prestige for us to have an endowed faculty chair here named for two individuals like the Browns,” Elrod said. “We are deeply honored by this bond between the Browns and Dalton State.”

“Endowed faculty chairs enable us to recruit and retain top-flight academic talent at Dalton State,” Venable said. “These kinds of investments in our faculty ensure our students have access to experienced and talented professors who elevate teaching and learning and also increase engagement with our larger community.”

The college plans to appoint the James and Sis Brown Chair before the start of the 2022-2023 academic year.