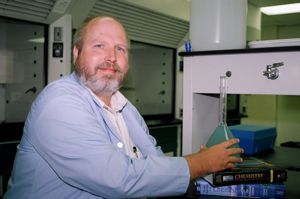 Last July, Dr. Richard Collison, retired Associate Professor of Chemistry and Chair of the Department of Physical Sciences at Dalton State College, passed away at age 65.

The Richard Collison Scholarship in Chemistry fund was created in his memory and to honor his commitment to student success last August. But the scholarship would only have lasted as long as the donated funds were available, said David Elrod, director of the Dalton State Foundation.

Due to his impact at Dalton State and his influence on so many of his students, the Dalton State Foundation established The Richard F. Collison Memorial Scholarship in Chemistry Endowment Fund that was awarded during its recent Scholarship Day ceremony.

“Because it is an endowed fund, the Collison Scholarship in Chemistry will endure at Dalton State forever,” Elrod said. “Richard’s legacy at Dalton State will live through the hundreds of lives he touched and through this scholarship that will assist students majoring in his favorite subject." 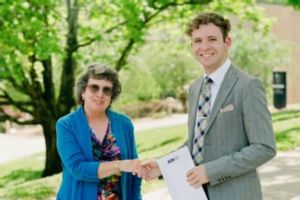 Poll said the scholarship will relieve some financial stress associated with attending college in the fall while also working.

“This scholarship will help me not worry so much about how many hours I work, giving me more time to possibly do some undergraduate research,” Poll said.

“Richard Collison was a catalyst for Dalton State’s new bachelor’s degree program in chemistry in the late 2000s,” said Elrod. “He would not have wanted that recognition, but Richard, with his wonderful sense of humor, would have appreciated the pun.”

Collison’s impact on campus was reinforced in the many comments made by his former students following the announcement of his death last summer.

“From all I have heard, Professor Collison was an amazing man,” Poll said. “I hope I can honor his memory in my use of this scholarship.” 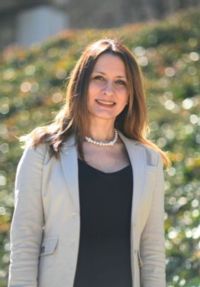 Carolina Hammontree was a Lecturer of Management in Dalton State’s C. Lamar and Ann Wright School of Business when she died suddenly while attending a meeting on campus last October.

The Carolina Duarte Hammontree Memorial Scholarship in Business was created in her memory shortly after the announcement of her passing.

To preserve the memory of Hammontree’s impact on students and see that impact continue, the Dalton State Foundation established the Carolina Duarte Hammontree Memorial Scholarship in Business that was awarded during its recent Scholarship Day ceremony. The scholarship is designed to assist non-traditional female business majors, reflecting Hammontree's own path to Dalton State.

This year’s Hammontree Scholarship was awarded to Ivy Gong, a junior majoring in Logistics and Supply Chain Management.

“I was so surprised when I saw the preference for this scholarship is a non-traditional student,” Gong said. “That means someone understands my struggles. It is tough to come to school full-time and support my family simultaneously because the time is limited. This scholarship is a powerful encouragement for me because I know someone not only knows my struggles but also wants me to succeed.”

Although Gong never attended a course taught by Hammontree, Gong said she can relate to Hammontree’s academic journey. 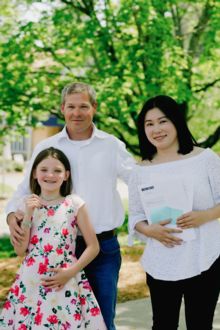 Hammontree earned a bachelor’s degree in accounting from the University of Carabobo in Venezuela. She worked for nearly 20 years for Venoco, an oil and petrochemical transitional organization in Venezuela. It was through her position at Venoco she came to the United States to learn English and obtain her master’s degree. After completing her degree, she returned to her home country for several years before moving to the U.S.

“I could relate to her a lot when reading her biography,” Gong said. “We both came to the U.S in our adult age and studied English before going further in our education.”

“We honor the lives of Professors Collison and Hammontree with these endowed awards,” Elrod said. “We are fortunate they both came our way. We will honor their memories forever with the annual presentations of these two special scholarships to students they would have surely wanted to help if they were with us.”

Donors wishing to give for the Collison or Hammontree scholarships may do so online at giving.daltonstate.edu or by calling the Dalton State Foundation at 706-272-4473.