Name: John Michael Walters (I go by Michael; only bill collectors and salesmen call me John) 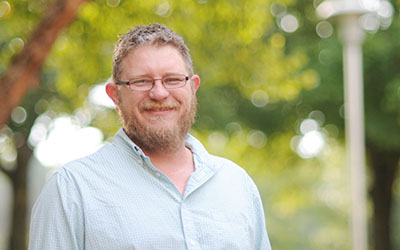 Why did you choose Dalton State? Location, affordability, and the English Department’s good reputation

What do you plan to do after graduation? Pursue a master's degree and teach English at the college level

Who is/was your favorite professor and why? Jerry Drye. Have you met him? He's hysterical! Seriously though, his sense of humor is perfect for getting his message across, and I've found his classes thought-provoking and challenging in the best possible way.

What activities are you involved in on campus? Classes. Full-time schedule here and a full-time job out there in the world leave little time for 'activities.'

Where is your favorite study spot? My wife sacrificed her crafts room at home to make me an office/man-cave so I could study. 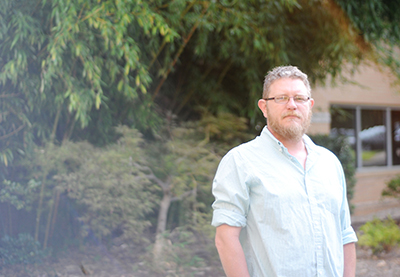 Where is your favorite hangout? The Honest Pint, Chattanooga, Tenn. Try the Reuben, and the duckfat-fried tater tots are to die for!

What is your best memory so far as part of the Roadrunner Nation? I got pretty charged up about the National Championship in basketball last year.

What is the last book you read? “I'll Never Leave This World Alive,” by Steve Earle

If you had a theme song, what would it be? “Rex's Blues,” by Townes Van Zandt

Favorite line from a movie? "It's 106 miles to Chicago. We've got a full tank of gas, a half a pack of cigarettes, it's dark, and we're wearing sunglasses. Hit it."

If you could only keep five possessions, what would they be? I don't actually think I care enough about my stuff to answer that. All that's just set dressing; it's the people in my life that are irreplaceable.

If you won the lottery, what would you do? I'd make sure my parents and my in-laws were debt free, set aside money for my kids' education, buy my wife a cabin in the mountains to get away from it all, and take a year off to travel.

What is a skill you’d like to learn and why? I'd like to learn to build things out of wood. Set up and build a wood-working shop. It's an exacting art, and something that would require my complete attention at whatever moment I was doing it. That kind of escapism is like prayer to me. 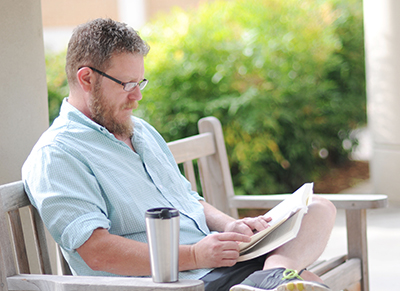 What cheers you up? Breezy, chilly, slightly-cloudy days.

If you could go back in history, who would you like to meet? Benjamin Franklin

What did you want to be when you were a kid? I think my earliest ambition was to be a doctor, but that morphed into wanting to play and produce music. However, when music became work, it became tedious and art shouldn't be that.

What does it mean to you to be part of the Roadrunner Nation? My presence at this school represents the opportunity to finish something that should have happened a long time ago.