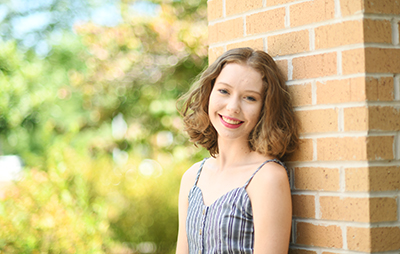 Why did you choose Dalton State? The affordability, but also the fact that its English major program is among the best in Georgia.

What does it mean to you to be part of the Roadrunner Nation? It means a lot that I can be part of an incredibly inclusive campus that, in my opinion, has the intention of making the best choices in every scenario. I truly believe that Dalton State cares about its students, and only wants us to succeed.

Before I came here, I had no idea how inclusive the campus was regarding disability access, race, and gender. Now that I’m here, I never want to leave. I’ve never met a Dalton State staff member that’s even partially intentionally negative – and I’ve met a good chunk of the staff at this point.

What do you plan to do after graduation? I’ve been training to be a professional dancer since I could walk, so I’ll be auditioning for different companies this year, and hopefully make it professionally by the fall. Around the same time, I should graduate with my degree, which will be my safety net in case I don’t make it as a professional dancer. Even after I get older and I can’t dance anymore, I want to use what I’ve learned at Dalton State to write and tell the stories I think that everyone needs to read.

Who is/was your favorite professor and why? This is the hardest question for me. I can list those with whom I’ve shared some of my favorite experiences: Dr. Nick Carty probably doesn’t even remember me, but I was in his Public Speaking class my freshman year. I had so much fun with that class, and it helped me overcome any anxiety I used to get before speaking. Dr. Jane Sample’s Intro to Composition Studies class might be my favorite class I’ve had so far. I’m currently in her Advanced Creative Writing class and thoroughly enjoying myself. The last professor I’ll list is Dr. Jennifer Randall, who taught my first ever Creative Writing class, and taught me more about writing than I think I’ve ever learned in another singular class. 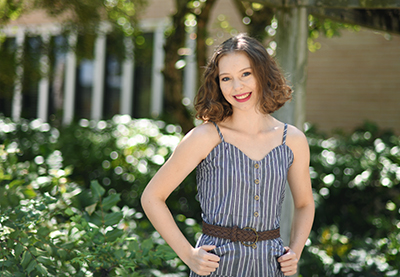 What activities are you involved in on campus? What am I not involved in? I feel like I know so many students in so many different organizations that I’m somehow part of them all myself. Officially, though, I’m the assistant director of the Peer Education Leadership Team, which is the team over Peer Education, a branch of the Dean of Students Office. I’m also the senator of Student Support Services on the Student Government Association, representing Disability Access, Peer Education and the Testing Center at SGA meetings.

What are some of your biggest achievements or accomplishments at Dalton State? I personally believe that I couldn’t ask for more than Dalton State has given me, but I’ll list a few accomplishments for which I’m especially grateful: in the fall of 2020, I had a paper that I struggled over for many hours named “Best 2000 Level” in an archived issue of The Exemplar, proving to myself that I could continue my goal of studying English with surface-level assurance. In Spring of 2021, I received a nomination from Brooklyn Herrera to run for the senator of Student Support Services on Student Government Association’s Cabinet, and recently I found myself in SGA’s first meeting of the year, voting alongside so many students with ambitions, talents and passions that would just astound you. Finally, this summer, in 2021, I received a promotion to the Peer Education Leadership Team’s assistant director, which has allowed me to work with our director, Ashley Fann - now a very, very dear friend of mine – and carry out some borderline-impossible goals we both have for Peer Education.

What is your best memory so far as part of the Roadrunner Nation? The Student Leadership Retreat - without a doubt. I am not someone who loves being thrown into a pool with tons of people I don’t know, without any real knowledge of what I’ll be asked to do for at least 48 hours, but I had the time of my life at that retreat. All the student leaders on campus were required to attend an overnight retreat at Dalton State, which was run by Amber Lesicko and Heather Williams. They never told us what we were doing next, they took us outside, they made us perform skits in the auditorium in Gignilliat Hall and they gave us T-shirts. I can’t even begin to express the amount of connections I made, how much I learned or the bonds I formed at that retreat. It was an experience that truly shaped my capabilities as a leader and member of the Dalton State student body.

What is the last book you read? I think the last full book I read was The Color Purple by Alice Walker, but since then I’ve started (and have yet to finish) The House of the Scorpion by Nancy Farmer and Church Folk by Michele Andrea Bowen.

Favorite comfort food? It depends on my mood. Sometimes I want to snack, so I’ll grab salt & vinegar or cheddar & sour cream chips. Other times, anything with potatoes and cheese. 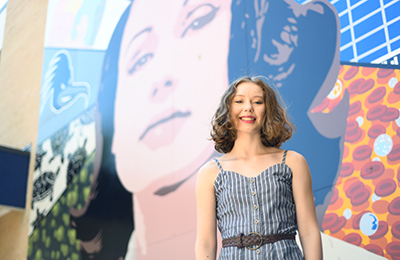 Favorite line from a movie? “I’m a damsel. I’m in distress. I can handle this. Have a nice day” is probably what I quote the most.

What is your guilty pleasure? Coffee!!!

What is a skill you’d like to learn and why? I’d love to learn how to ballroom dance. I’m a dancer, and, for some reason, that’s the only style I’ve never learned.

What is your favorite book? Invisible Man by Ralph Ellison.

Who would play you in the movie version of your life? The only person I can think of that works is Zendaya Coleman.

If you could go back in history, who would you like to meet? I would either like to meet Emily Dickinson, Sacagawea or Harriet Jacobs.

Where is your favorite place to eat? Red Lobster. I’m pescatarian and don’t go there very often.

What did you want to be when you were a kid? I may or may not still attempt this at some point in my life, but I wanted to be an actress. I had a knack for it, too, so don’t be surprised if you see me in something in the future.

As a Roadrunner, what does it mean to Run Boldly? To Run Boldly in my opinion, can be misinterpreted as “running to catch up on everything that feels out of hand,” but that’s not what to Run Boldly means. To Run Boldly means to keep your pace with those around you, eventually run faster – taking lead – and doing so with an amount of confidence that cannot be shaken.