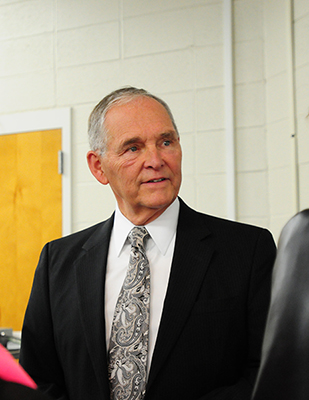 Dr. Ralph Boe is executive in residence in the Wright School of Business. Dr. Boe provides guidance to business students and is a frequent guest speaker to business classes. He often shares his ethical views in BUSA 3060 Business Ethics. In MNGT 4701 Strategic Management, Boe presents a case study of his former international carpet company, Carpet’s International, Inc. He returns at the end of each semester in the MNGT 4701 course to serve as an industry evaluator for senior-level team presentations. He is a frequent guest at the BUSA 3701 Professional Development class etiquette lunch and dinner events and works with junior-level students on mock interviewing, networking and preparing for the world of work. He is engaged in scholarship and publishing with faculty. Boe and WSOB Dean, Dr. Marilyn Helms, wrote and published the CASE, Turnaround case at Carpets International in the CASE Journal, (2018) 14(4) pp. 1-22. Dr. Boe is also a member of the WSOB Business Advisory Council.

Boe born was in Staten Island, N.Y. of immigrant parents from Norway, just retired from Beaulieu after 13 years as president and then CEO. He has over 44 years of experience in both carpet and fiber businesses. Boe is an experienced senior executive in management, operations, marketing/sales and strategic planning as well as an articulate communicator.

Boe holds a Ph.D. in physical chemistry from the University of Maryland (1970), mathematics and chemistry from Augustana College (1965), plus a business management study from American Management Association (1982).

Prior to joining Beaulieu, Boe spent four and a half years as chief executive officer/managing director of Carpets International, the largest carpet manufacturer in the United Kingdom.

From 1993 to 1996, Boe served as chief executive officer and president of Diamond Rug and Carpet Mills. He directed the company’s survival following devastating storm, fire, loss, of finished goods inventory and the death of the company’s founder/owner. Boe orchestrated a turnaround in progress and eventually assisted in the sale of the company to a strategic buyer.

Boe served as president of Horizon Industries from 1984 to 1992, a publicly traded company, doubling sales to $300 million and quadrupling market capital realized in the sale of the company to a strategic acquirer. From 1983 to 1984, he managed a $500 million fiber business with functional uses in apparel, industrial and home furnishings market for E. I. du Pont de Nemours, Inc. (Textile Fibers) at the end of his 15-year career with Dupont.

Boe is also the founder and first chairman of the Carpet Industry’s consumer credit program, which grew to $600 million in revenue with profit in all but the first year. During his tenure in the United Kingdom, he was the chairman of the Carpet Foundation/British Carpet Manufacturers, representing the manufacturers of the United Kingdom and president of the European Carpet Association, representing all of Europe. He served on the board of the Carpet and Rug Institute as chairman.

His overall philosophy is, “No one person does it all. It takes assembling strong team members positioned correctly and given the freedom to contribute and perform that ultimately gets results.”

Boe and his wife Nancy reside in Atlanta along with their daughter, Kirsten, and their son, Darren, who lives in Florida with his wife, Laura, and sons, Landon and Logan. Together, the Boes established The Stacey Ann Boe Foundation in memory of their daughter, Stacey, used to assist many young people in Atlanta and most recently Horses for Heroes to help rehabilitate injured military from Iraq and Afghanistan.