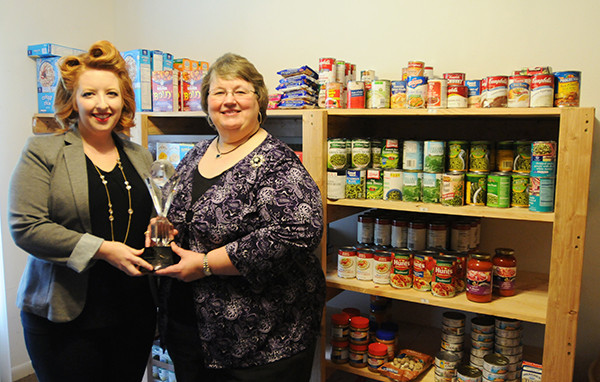 Christian Roach lives on $50 a week.

He’s a full time college student at Dalton State and says his bills add up to more than he can usually afford.

Roach has plenty of family support – lots of love and encouragement – but his family isn’t able to support him financially.

“If it was not for the Birdfeeder, I’d have to go without food a lot,” he said. “But with the Birdfeeder, I don’t have to worry. I see other students struggling sometimes, too, and I feel good knowing they have that resource.”

The Birdfeeder is a food bank for students living on campus at Dalton State. From June 2014 to June 2015 there were 1,155 visits to the Birdfeeder. It comes to an average of 96 a month, which includes summer months when there are not as many students on campus. The Birdfeeder receives no funds from Dalton State to operate. It is completely donation-based.

For contributing to a nurturing environment, which in turn helps students be more successful, the Birdfeeder was recently awarded the Chancellor’s Service Excellence Gold Service Award for Outstanding Student Improvement.

“A hungry student can’t concentrate on school work,” said Dr. Jodi Johnson, vice president for Enrollment and Student Services. “If students’ basic needs aren’t met, they can’t get a degree. Three-fourths of our students receive need-based financial aid, and one-third of our students are living at or below the poverty line. The Birdfeeder definitely fills a need.”

The Birdfeeder opened in January of 2014 after several people saw the need on campus. Sherry Breitwiser was an employee who saw students needed food and began keeping small items, such as cereal, in her office.

Janet Hayes, the administrative assistant in Enrollment Services, wanted to expand. She knew she could get donations, but she couldn’t run the food bank. She contacted Natalie Bates, director of Residential Life, and Jason Ramos, the assistant director who died in a car wreck earlier this year. They had also seen the need and were discussing options to help provide food for students.

The result was the Birdfeeder.

“I knew students who didn’t have outside help,” Hayes said. “I talked to Jason and Natalie. I called them and said ‘If you can run it, I will find the food.’”

Hayes spearheads multiple donation drives on campus among faculty and staff, and she has the help of several churches in the area.

Students are allowed to receive up to 12 items a week from the food pantry. No questions are asked about their financial need.

Some students need help weekly, while others may only utilize the service once a year, Bates said.

“It’s not my job to determine who needs it,” she said. “I’m there to provide the service because I know the need is there. They may have just had some kind of emergency come up or they may not receive any financial support from their families. We have a lot of different people in different situations who use it.

“This is student-focused. It’s what we do,” Bates said. “Winning this award, being recognized for what we’re doing, especially right after Jason died, is extra special. It was definitely an honor.”

When Ramos died, approximately $7,000 in donations in his memory were given to the Birdfeeder. Plans are to use the funds to expand the Birdfeeder. When Mashburn Hall opens in August 2016, the Birdfeeder will move to the newly renovated student center. Renovations are set to begin on that later this year.

“We don’t have all the details worked out, but I have a designated space in the renovation plans for the Birdfeeder,” Johnson said.

They hope to begin serving all students at Dalton State. That will take the number of those serviced from approximately 300 to 5,000.

“I’m thankful for it,” said student Sierra Hardy. “There’s always someone in need.”

Donations of nonperishable items can be taken to the Residential Life Office or Enrollment Services inside Westcott. Monetary donations can be sent to the Business Office.