Mission of Office of The President

The Office of the President provides leadership for the overall operation of the College, ensuring that the institution proceeds within its approved statement of purpose.  The President coordinates these operations through the Offices of Academic Affairs, Enrollment and Student Services and Fiscal Affairs. The President also provides direction for intercollegiate athletics, the marketing and communications and institutional research functions and serves as the official liaison to the Dalton State College Foundation. 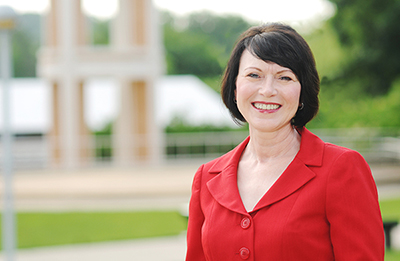 Dr. Margaret H. Venable was named President of Dalton State College on September 15, 2015 after serving as interim president for nearly nine months. Prior to coming to Dalton State, she served as Provost and Vice President of Academic Affairs at Gordon State College. She has worked in the University System of Georgia more than 30 years.

Dr. Venable has also served as Vice President and CEO of the Oconee Campus of Gainesville State College which was consolidated with North Georgia College and State University to become the University of North Georgia in January of 2013.

She also served previously as Assistant Vice President for Early Colleges and Academic Initiatives in the Office of Academic Affairs at Georgia Perimeter College. In this position, her contributions included the establishment of the first dropout recovery early college charter school in the southeast.

She was active in the Atlanta chapter of the American Chemical Society and has served on national ACS committees to write General Chemistry standardized exams. She has received multiple teaching awards and honors including Georgia Perimeter College’s prestigious Cole Fellow Award and the GPC Alumni Association’s Outstanding Faculty Member Award.

Dr. Venable is a past participant in the American Council on Education Fellows program (2008-09) and the University System of Georgia’s Executive Leadership Institute. The ACE Fellows program is described as “the premier and oldest leadership development program serving all institutional categories and functional areas within higher education, designed through a highly competitive nomination and application process to identify and prepare rising administrators to advance to senior leadership positions, including the presidency, in higher education institutions.”  Dr. Venable was hosted by Southern Polytechnic State University during her ACE Fellows year and by the University of West Georgia during her ELI job shadow experience.

Dr. Venable earned her bachelor of arts degree with high honors in chemistry from Agnes Scott College. She was awarded the President’s Fellowship to attend Georgia Institute of Technology where she completed her master’s degree in Chemistry. While teaching full-time at Georgia Perimeter College, she earned her Ph.D. in Science Education from Georgia State University.

She is the proud mother of adult son, Quentin. In her spare time, she enjoys reading, gardening, walking and yoga.