‘The Heart of a Nurse:’ Nursing Student Called to NICU 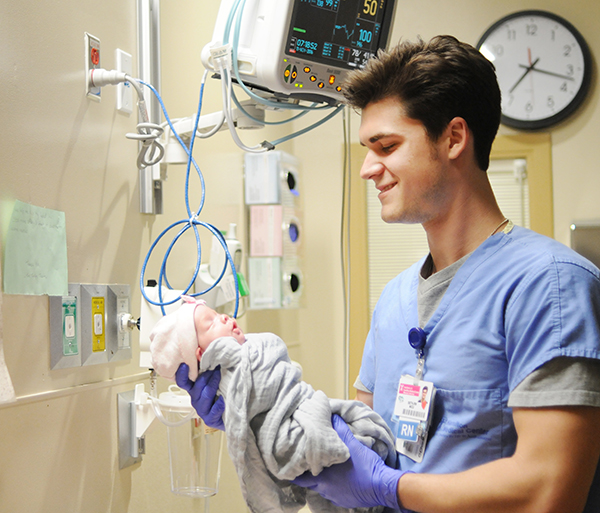 Seth Owen works with the most vulnerable patients.

But there’s also healing and hope, and often, miracles.

“He meets new parents at possibly the worst time in their lives, but his warm personality, calm manner, and adept care of their newborn instantly put families at ease,” said Dr. Cheryl Owens, an associate professor of nursing at Dalton State.

“Working with babies is tough sometimes,” Owen said. “They can’t talk to tell you what’s wrong. I can’t talk to them to tell them what’s going on. I know that we, as their nurses, are their voice. The nursing education I received at Dalton State helped provide me with the confidence I need to work in the NICU.”

Like many nurses, Owen believes he was called into that profession. From the time he witnessed his younger brother being born as a young child, he knew he wanted to work as a nurse.

“Nursing chose me,” said Owen. “I cut the cord when my brother was born. I knew I wanted to be a nurse caring for babies. As I grew older, and especially through the RN program at Dalton State, that was confirmed. It’s a field God called me into. I believe it is a gift he has given me.”

“Nursing is often described as both a science and an art,” she said. “But we can’t teach them the art of being a nurse. With Seth, we didn’t have to worry about him learning the art of nursing. He came to our program with the art already deeply embedded in his personality. He has what I call ‘the heart of a nurse.’ Not only is he a highly skilled and dedicated clinician, he is caring and compassionate. His caring extends not just to his patients, but to their families and his colleagues.”

For Owen, nursing is a gift that God has called him to share with the world. He appreciates the one on one time he gets with patients so he can be completely responsive to their needs.

“I’m blessed to work in this field,” he said. “The reward is so fantastic. The difference that’s made in these families’ lives. Seeing an infant in the NICU for so long, and then when I get to walk them out to their car and buckle them in for the first time to go home, that’s a miracle. I get to see the miracle of life, the miracle of birth.” 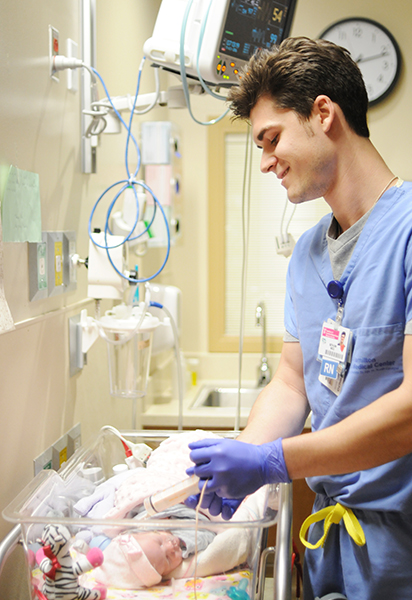 Laura Petty, the clinical educator and transport coordinator in the NICU, believes Owen is a great example of what a nurse should look like.

“He is always professional, kind and caring, not just to his small patients but also to the families and his coworkers,” she said. “He always delivers exceptional care with a big smile and an even bigger heart.”

Owen has been able to work in the NICU while working on his bachelor’s degree thanks to Dalton State’s RN to BSN program, which is designed for working nurses to continue their education without interrupting their work schedules.

“I’m so blessed Dalton State started the BSN program,” he said. “I want a higher education. I want a better understanding. I hope to go on to become a neonatal nurse practitioner.”

In the BSN program, Owen is learning how to research, gather information on his own, and stay up to date with current medical practices.

“He achieved his goal of becoming a NICU nurse right out of the nursing program and enrolled in the RN to BSN program to cement his nursing education so that he can pursue the many facets of the nursing profession,” said Dr. Lynda Ridley, chair of the BSN program. “What stands out to me about Seth is his family support and his unwavering faith in humanity.”

The BSN program is available on a flexible schedule. Beginning in the spring, the courses will be offered completely online giving professionals even more opportunity to complete the degree.

“We see a clear need to be available to those who work full-time and cannot get to a brick and mortar setting,” Ridley said. “The online classes will maintain the same rigor and expectations that are currently present in the program.”

Owen definitely believes he is receiving a challenging education at Dalton State and an affordable price, too.

“Dalton State chose me,” he said. “I’m a family guy and didn’t want to move away. Because of Dalton State I have my job. It’s difficult sometimes to go to school full-time and work in the NICU, but I know it’s worth it in the end. You can get all the education and experience here, and at an economical price. I came to school for an education but I got so much more.”