Dalton State presents ‘Much Ado About Nothing’ 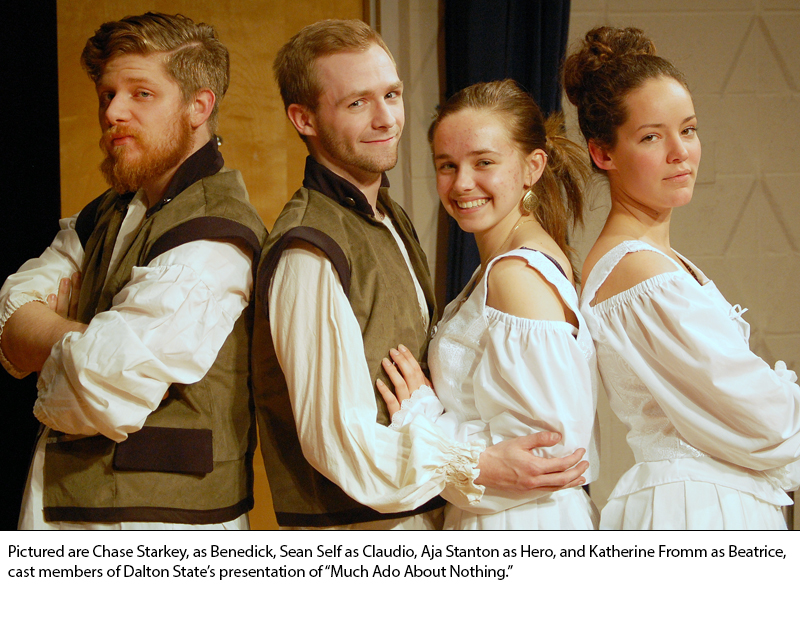 Can scandal and deceit bring happiness? William Shakespeare’s tragic comedy “Much Ado About Nothing” is a play that intertwines lies and love with a hint of hilarity.

This play will be performed by Dalton State students on campus in the Goodroe Auditorium from Wednesday, March 30 to Saturday, April 2. It will begin at 7 p.m. each day, and doors will open at 6:30 p.m. Tickets are free to all DSC staff, faculty and students with an ID and $5 for guests.

“‘Much Ado About Nothing’ challenges actors because of the dark and light qualities in this comedy,” said director Jackie Daniels, associate professor of communications and theatre arts. Scandal and deceit are a major part of a play, and both sides are closely examined. As the plot twists between lighthearted fun and dark moments, the audience will be caught up in the sharp contrasts from one scene to the next.

This story builds around tricks and deviousness that brings lovers together, and tears another couple apart. Two couples are placed in very different scenarios; one of fun and mischievousness, binding the love of Beatrice to Benedick, and one of vicious and evil doings, choking the life out of Hero and Claudio’s love. These parallel plots are intertwined and expose the audience to the lighter and darker qualities of the play.

“It is the expressed desire of our cast and crew to entertain,” Daniels said. “Shakespeare’s language can be challenging for some audience members, but remember, if the words are a bit difficult, everyone understands body language. I hope the audience laughs, cries, and interacts with the players when the cast comes through the aisles.”

The cast comprises staff and students from DSC, and it features Chase Starkey as Benedick, Katherine Fromm as Beatrice, Sean Self as Claudio, Aja Stanton as Hero, Caitlin Pedigo as Leona, Laurie Raper as Antonia, Jonathan Wright as Don Pedro, Christopher Mendoza as Don John, Devin Hearn as the Friar, Josh Beard as Barachio, Caleb Compton as Conrad, Rosi Lowry as Ursula, Savannah Cross as Margaret, Michael Koop as Dogberry, Samuel Killen as Verges, Sean Self as the Watch, Michael Koop as the Musician, and Samuel Killen as the Messenger.

The crew includes Austin Couts, stage manager; Laurie Raper, costumes; Jay Shockey, light and sound technician; Donna Hendrix, program; and Joseph Watts, poster and program design. Emily Shepherd serves as assistant director. She has worked in all parts of theatre from the Cincinnati Shakespeare Company to the Otherworld Theatre Company in Chicago to the Closed Door Entertainment group in Chattanooga.

The Dalton State theatre group produces plays with the assistance of a grant from Dalton State Foundation and the Office of the Vice President for Academic Affairs.