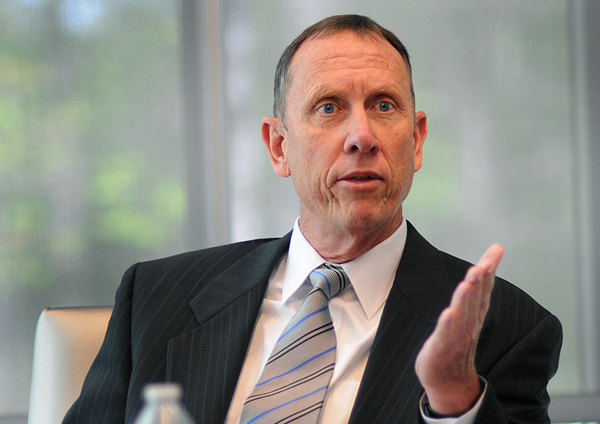 Nine months after being brought on board to shepherd Dalton State’s athletic program through a period of transition and reorganization, Jon Jaudon has been named the permanent athletic director.

“I am delighted to announce that Jon Jaudon has agreed to join us in this new capacity as director of our athletic program,” said Dr. Margaret Venable, president of Dalton State. “We have a maturing program that has already achieved remarkable success, and I cannot think of a better individual to lead it at this stage in its lifecycle.

“During his interim time here Jon was able to reorganize our assets into a program that is positioned for long-term success and financial sustainability,” she said. “He is a valued member of our team, and I hope everyone will join me in supporting Jon as he settles in to his expanded role leading our program.”

“I want to thank Dr. Venable for demonstrating her faith and trust in me to lead our athletics department,” said Jaudon. “We have developed a trusting, respectful relationship over the last nine months, and it is that foundation that has led me to accept this position permanently. I look forward to being a part of the leadership team that will shepherd the vision she has set before us to be a first choice destination college. I am energized each day to contribute to Dalton State College through the platform of intercollegiate athletics.

“There is much to do,” he continued. “Realizing all that this college and athletics department can be is a team effort. I envision so many wonderful experiences ahead for this college and community. I am humbled by the opportunity to contribute to the Dalton State experience.”

“We are proud of our program’s success to this point, and we look forward to next season when we will once again put forward a roster of strong teams that can compete for championships,” Venable said.

Dalton State sponsors seven athletic teams including men’s basketball, women’s cross country and track, and men’s and women’s teams in soccer, and golf. The College is an NAIA school and a member of the Southern States Athletic Conference.