Dalton State has lost a special friend, champion, and benefactor with the July 8 passing of Mary M. “Sis” Brown.

Mrs. Brown, 89, was the widow of James E. Brown for whom the College’s Brown Center is named. She served on the Dalton State Foundation’s Board of Trustees since 2005 and chaired the Foundation’s first comprehensive capital campaign from 2006-2008, leading the effort that raised $21 million, far exceeding the campaign goal of $16 million. 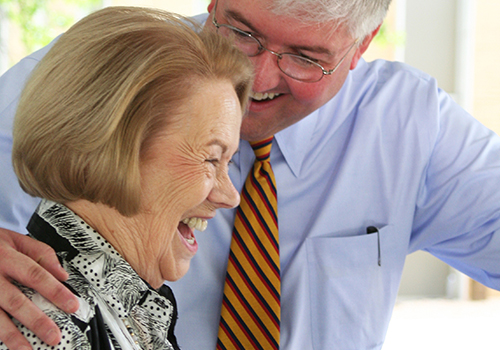 Each spring the Foundation awards scholarships named for Sis and James Brown as well as scholarships to members of the Brown Industries family. But beyond her philanthropic leadership, Mrs. Brown was an enthusiastic cheerleader for the College, attending Scholarship Day and other Foundation events as well as Roadrunner basketball games which she enjoyed with family members and friends.

“Sis Brown has left a tremendous legacy,” said President Margaret Venable. “She has impacted this community for generations to come through her servant leadership and philanthropy. She will remain a role model for many of us long after she leaves this earth.”

Mrs. Brown was born in Birmingham, Alabama, and grew up during the Depression in the Kentucky border town of Oneida, Tennessee. During World War II, she contributed to the war effort by serving as a telegraph operator in Oneida and after the war moved to Dalton, Georgia, where her brother had found work with a local supply company.

She soon met James Brown and married him the day after her 22nd birthday. That was 1949. She and James spent the next 55 years together before he died in 2004, soon after learning that a new classroom building at Dalton State would be named in his honor. 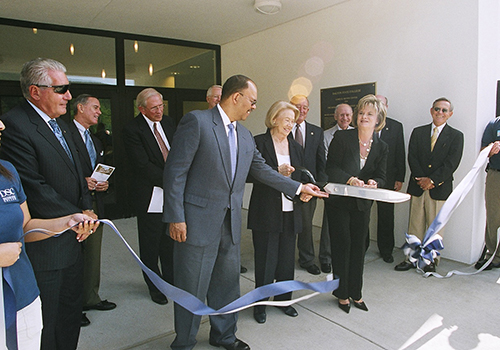 Sis and James Brown established Brown Printing in 1958 where they provided printing and sample services to support the burgeoning carpet industry. At the time of her death, Mrs. Brown was one of two original employees still working for the company which over the years evolved into Brown Industries.

The Browns were early supporters of Dalton State when the College was being planned and built in the 1960s, and James Brown was a charter trustee of the Dalton State Foundation in 1967. As the College grew, so grew the Brown’s support and involvement with it. Mr. Brown served multiple terms on the Foundation Board, a term as Vice Chair of the Foundation, and leader of a major fundraising initiative in the late 1990s that was used to leverage the institution’s transition from a two-year college to its first baccalaureate degrees. In addition, he served on the University System of Georgia’s Board of Regents from 1987 to 1994. When the James E. Brown Center was dedicated in 2006, it was Sis Brown and daughter, Lynn Whitworth, who cut the ribbon.

“In this, Dalton State’s 50th year, we celebrate Sis Brown’s five decades of generous leadership and philanthropy for the benefit of our students, faculty and staff, academic programs, and campus growth,” said David Elrod, director of the Dalton State Foundation.

Dr. Jim Burran, President Emeritus of Dalton State, remembers Sis Brown with affection and gratitude. “Sis Brown was a remarkable person, and Dalton State College is a better place because of her leadership,” he said. “Behind her quiet, unassuming personality lay a deep devotion to the Dalton community, and her influence on the College will be felt for many years to come.  Sis and James leave their fingerprints all over this institution, and I am grateful for their friendship.” Dr. Burran was president of the College during the capital campaign led by Mrs. Brown. 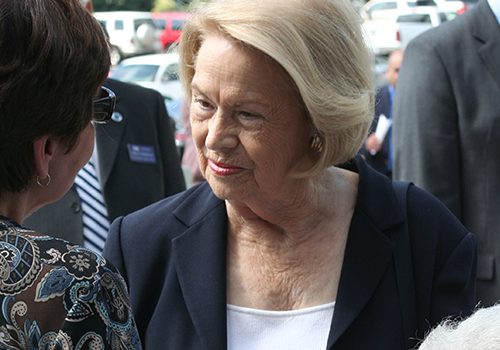 For Will Skiffen, a recent graduate of the College’s teacher education program, the loss is personal. “Mrs. Brown is the reason I was able to get my degree and be able to become a first year teacher,” he said. “I received a scholarship named for her my senior year that helped me pay for classes and my EdTPA assessment. My thoughts and prayers go out to her family in this time. This is a huge loss for Dalton State. ‘Sis’ will be missed dearly.” Skiffen will begin his career this fall as a social studies teacher at Gordon Central High School.

In addition to Dalton State, Mrs. Brown’s philanthropic support and volunteerism also benefitted Hamilton Medical Center, the Community Foundation of Northwest Georgia, Dalton First United Methodist Church, and the Girl Scouts and Boy Scouts. She was the 2010 recipient of the prestigious Jean Harris Award from the Rotary Club of Dalton.

Funeral services for Sis Brown will be held on Tuesday at 5:30 p.m. at Dalton First United Methodist Church. The family will receive friends in the church atrium from 3:30 to 5:30.

The Brown family has designated the Dalton State Foundation and Dalton First United Methodist Church as recipients of memorial gifts.