Aaron Burress emerges from the shadows and into the spotlight.

The excitement builds as his name is announced. His fellow players high-five him, and he runs onto the court.

“It’s an unbelievable feeling,” said the 6’5 forward for Dalton State’s basketball team. “I’ve always dreamed about this happening but never thought it would come true. I was in awe that first time I stepped onto the court, and it has kept up every single game. I love playing the game. I love playing on a college level. It excites me.” 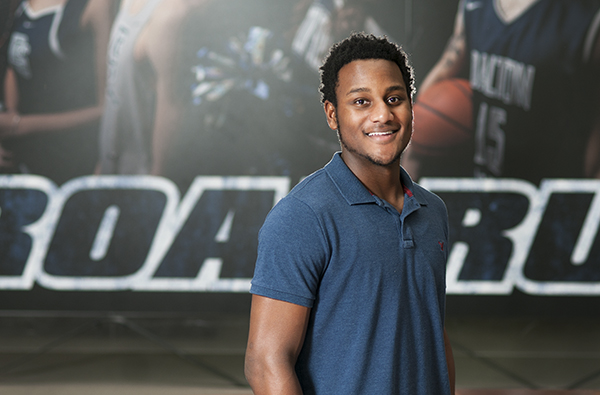 In only his freshman year, Burress has proven he is up to the challenge of collegiate athletics. He is a starter for the 24-8 Roadrunners.

The Roadrunners now face their third run at a National Championship in the NAIA. They brought home the title in 2015, in their first year of eligibility and second year since the revival of athletics at Dalton State.

“Aaron Burress is a very astute player,” said Coach Tony Ingle. “I tell him something once and he goes and does it. It may not be perfect yet, but he gives it a hard effort. He’s someone with character, who loves the game, and who is coachable. And that’s what we look for in players. We also look for players who are serious students, and he is.”

Burress can be counted on to make rebounds, to take on foul shots, and to block.

“He’s our guy,” Ingle said. “He’s a freshman, and he’s dependable. It’s beautiful. He has a silent confidence about him, but he stays humble. We’re teaching these young guys to live life through a game. I see Aaron emerging as an outstanding leader as he slips into the future.”

Burress acclimated to life at Dalton State easily. He had attended a preparatory school in Raleigh, N.C. and received offers to play basketball from four colleges.

Dalton State was the obvious choice. For one, it’s more affordable than the other schools extending offers.

But there was more that drew him to Dalton State. 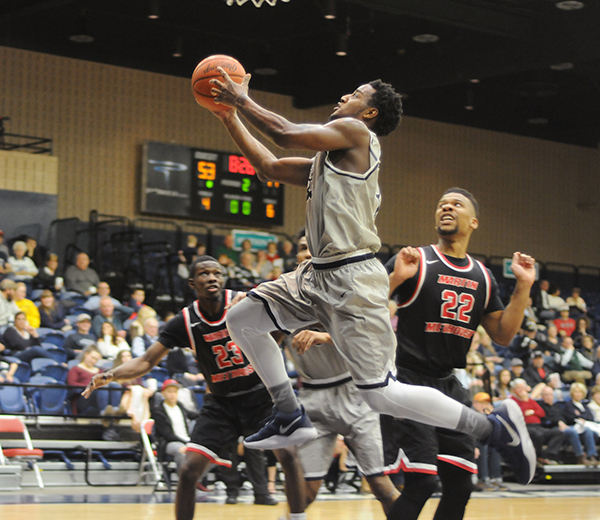 “I think Raleigh was hard to live in,” Burress said. “There were cliques, but here everyone is friendly. Everyone is family here. That’s why I like it. This has been one of the best teams I’ve ever been on. We have so much teamwork. It feels like we’re all one unit, and we don’t have different groups. We’re not split by small things that would cause a lot of teams to stop talking to each other. If you can trust your teammates that way, you can have better success on the court.”

Working with Coach Tony Ingle also helped spark Burress’ interest in Dalton State. He’d heard Ingle is a good coach and someone who cares for his players.

“He’s intense, very intense, on the court,” Burress said. “He doesn’t ever let up. But he knows how hard it is to get to the National Championship and win. He wants that for us.”

Ingle pushes his players outside the court as hard as he does inside the court. He watches over them each Sunday to ensure they complete their assignments and dedicate time to their studies.

“He wants us to try to get all A’s,” Burress said. “He wants you to be a serious student and go to class every day. Athletes get a lot of 8 a.m. classes. We wake up at 6, go work out, and then go to class. It’s hard, but we do it. It’s good to have a coach like that who cares about your degree and wants you to succeed in life.”

Burress applies the same dedication and focus to his classes that he does on the court. He is a business management major.

“My dad has drilled it in me to get a degree since I was a kid,” he said. “He told me I can do better for myself and my future family if I have a degree, and I believe him. It’s hard to see my friends who didn’t go to college make great money and work jobs that are good for them. I see that and want it. But I know I’m here for a reason.

“Dalton State feels like home,” he said. “I want to be the best in the nation. I want to be able to come back home and say that we won.”