‘Hard but Rewarding:’ Nursing Graduate Pushes Through Disability to Succeed 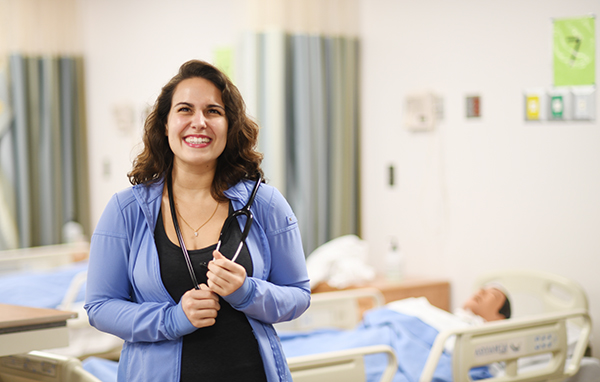 “She took care of him like he was part of her family,” Roe said. “She was kind and compassionate to me and my family, making sure we were taken care of as well. She was a huge blessing at a very sad and difficult time.”

Roe, an associate professor of nursing at Dalton State, taught Bruno while she was pursuing her associate of nursing degree. Bruno will be graduating from Dalton State with her bachelor’s degree in nursing on Saturday, Dec. 15.

Bruno completed the RN to BSN program, which is an online program designed to help those already working as nurses to complete a bachelor’s degree. She received her associate in nursing and began working at Gordon Hospital’s PCU in spring of 2017.

“She did clinical rotation at Gordon and was requested to return to the same floor every week,” said Roe, who also serves as the assistant director of the Ken White Student Health Center on campus. “After graduation she went on to work on that floor.”

The intensity of Dalton State’s nursing program – both in the classroom and during clinicals – gave Bruno the confidence she needed to become a nurse even with a learning disability.

“It’s hard, but it’s so rewarding,” Bruno said. “The nursing professors and cohort didn’t make me feel like I needed to shy away from telling people about my disability. Everyone knew. I had the right to not say anything, but I felt safe telling them because we help each other out. You don’t leave a nurse to drown. Dalton State has the best professors you can imagine. On the first day they give you their cell phone numbers and say, ‘Come see me.’ You’re part of their family. It’s wonderful.”

Bruno began her education at another, larger university.

“It was too big,” she said. “I needed a smaller school. Dalton State was perfect. I knew people who went here, and they told me ‘you aren’t just a number here.’ That appealed to me because I was feeling that at my other school. Also, parking here isn’t as bad as it was at my other school. I was having to park far away and either walk or catch a bus to get to class.”

Bruno knew she needed accommodations to help her succeed as a college student with dyslexia. She’d had them in high school as well. But at her first school she didn’t feel supported when she went to request the help. 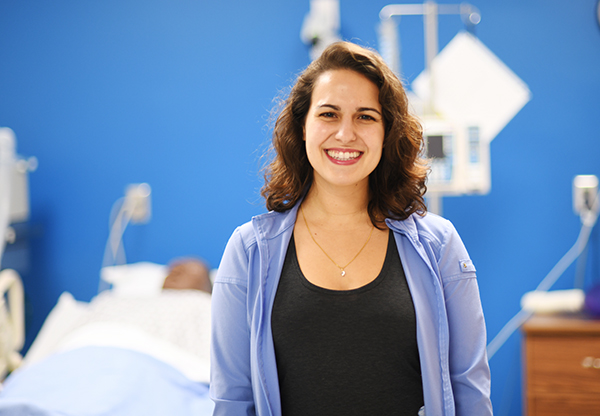 “I just got pushed aside,” she said. “They threw papers at me and said, ‘there you go.’ But here, Andrea Roberson (associate director of Disability Access and Student Support Services) walked me through the process step by step. She has emailed me every step of the way to make sure I’m receiving the help I need. I felt like someone actually cared and could help me navigate the system.”

Bruno’s dyslexia affects her reading and writing. Because of that, it takes her longer to take exams, and it often means she misspells simple words. She was able to record lectures and have extra time to take exams. She was allowed to have someone take notes for her during lectures but preferred to do that herself.

“Not many people with learning disabilities go into nursing programs,” she said. “We had to make adjustments, so I could keep up with the classes. It was tough. But the professors were always willing to help and fit my accommodations in really well and easily. I never wanted the accommodations to become a crutch. I am able to nurse independently, but I needed some help getting there.”

During the ASN program, Bruno emerged as a student leader. She often sent out homework reminders to the rest of her cohort. She organized a photo of the faculty holding a “congratulations” sign, which she then had printed to hand out to all her classmates, said Dr. Sylvia Driver, the nursing department chair.

“Robin was a very dynamic class representative for her two years in the ASN program and has remained focused in the BSN program,” said Dr. Lynda Ridley, director of the RN to BSN program. “She is friendly and talkative and truly cares about her peers and instructors. While in nursing school she worked at Harley Davidson and became an ambassador for Dalton State to everyone she met. Robin was not just a student. She made a difference and left her mark here at Dalton State.”

“Everything has been so fast-paced, but it works,” she said. “The programs cover so much. The professors are making sure you’re prepared. And when you come out of the programs, you are. I wanted to go straight into my BSN because I still knew all the professors, and they understand my accommodations.

“The hardest part of the BSN is that you have group work, but we’re all working nurses so coordinating times to get together can be hard,” Bruno said. “The professors make sure everything is set up, so you succeed though. You go at a good pace, so you can balance school and nursing.”