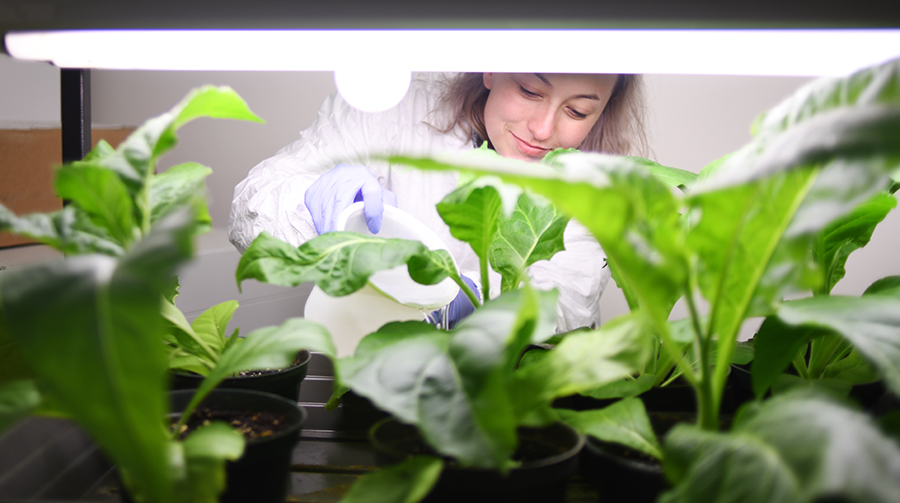 Scientists are discovering how to modify tobacco plants in a way they can be used to clean harmful environmental contaminates.

They culture plant cells, then clone them and use a process similar to genetic engineering to create a contaminant-resistant plant.

And they’re doing it in labs at Dalton State College.

Dr. Hussein Mohamed, an associate professor of biology, oversees the undergraduate research on the tobacco plants and has room for others to join the project.

“To have this experience is unbelievable,” said Kristen Price, a biology major who graduated in fall 2018 and still volunteers on this project. “I’m really thankful to have this opportunity. Dalton State is such a small school. I don’t think I would have gotten this far into research as an undergraduate at a bigger school. Everything is hands on here, and you always have a professor willing to do research with you.”

As the research progresses, the team expects to have a strain of tobacco that is highly resistant to mercury.

Mercury attacks the nervous system when humans are exposed to it, and it’s a common contaminant in and around industrial areas, Mohamed said. Phytoremediation, using plants to clean contamination, is cost-effective and environmentally friendly. 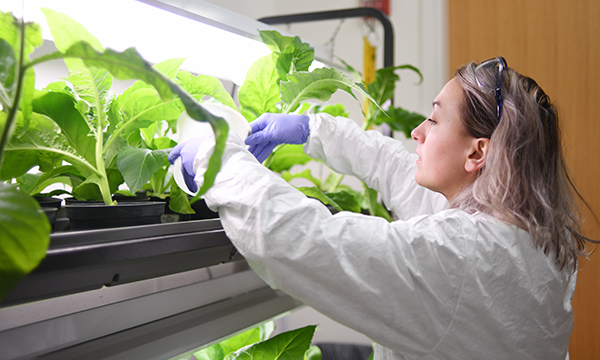 “Currently, treatment of this contaminated water or soil is very expensive, and you have to treat the contaminated sites with chemicals,” he said. “To get rid of these contaminants, you are still having to put chemicals back into the soil. It affects every aspect of the environment, soil, crops, water. So by using a plant, you are cleaning the soil without introducing more chemicals. The plant takes the toxic material from the soil, and it cleans the contaminant. The benefits of bioremediation include lower costs and less disruption of the contaminated environment when compared to traditional remediation methods. We are taking mercury from the soil and turning it into a nontoxic form.”

Tobacco can already handle some levels of mercury. It’s also easy to grow and grows quickly. So it’s an ideal plant for this type of research.

In the lab, students extracted cells from a piece of leaf and placed it in growth-nutrient media. They clone and grow the tissue without allowing the entire plant to grow.

“We had to grow the plants in the greenhouse first,” Price said. “We’ve taken the tissue samples and cloned one of the plants. We had to sterilize it to make sure nothing is contaminating the sample, and that can be difficult to do.

“It takes a while to learn the basics of how to do this without contaminating the growth media,” she said. “That’s why I’m still working on this project even after graduation. We’re not done with this research, and I want to be published before I go to graduate school.”

Mercury is then added in incremental steps. The cells that survive to the end are then used to grow a new plant. 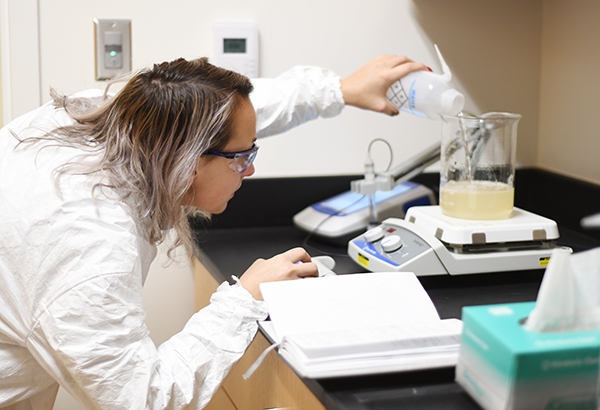 “We are selecting the cells that have the highest resistance to the mercury, and then we clone it and grow the entire plant,” Mohamed said. “Sometimes when people hear genetic engineering it’s scary. That’s true, even though I work with it. This one is different. We’re not genetically engineering the plant itself so the plants are safe. It’s like we’re building their immune system. It works similarly to how vaccinations work in humans.”

Genetic engineering is a process that happens in nature without scientists. But it takes many years.

“The biggest problem with genetic engineering is DNA contamination,” he said. “Once you put a plant in the ground, if it’s infected with bacteria it can change other crop, and that’s a problem.”

Having this kind of experience as an undergraduate is invaluable.

“This isn’t just to build a good curriculum vitae or resume for them but so they understand the materials more,” Mohamed said. “It teaches them how to read and extract information and analyze data. They’re not just following a lab procedure but learning how to design research. They’re learning how to think as researchers.

“I have worked at many universities, and I have never seen the kind of equipment for research Dalton State has, especially for a school this size and for undergraduate use,” he said. “They’re exposed to concepts and equipment most students aren’t usually exposed to until graduate school. The benefits are great for our students.”

Price has been able to present at conferences and gain confidence in her ability to work in a lab, thanks to the tobacco research.

“I’m a very hands-on learner,” she said. “Getting to do the science and see the outcome for myself is one of the best ways I learn. I’m gaining real-life experience in the lab and presenting at conferences. I want to be published. And I am hoping to build on this project in graduate school.”

“When you give the students here a chance to do this, they fly,” Mohamed said. “That’s what I love about Dalton State.”

There have been several Dalton State students involved in the tobacco research. Students who want to become involved in the project can contact Dr. Mohamed at hmohamed@daltonstate.edu or stop by his office, Sequoya, room 141D.