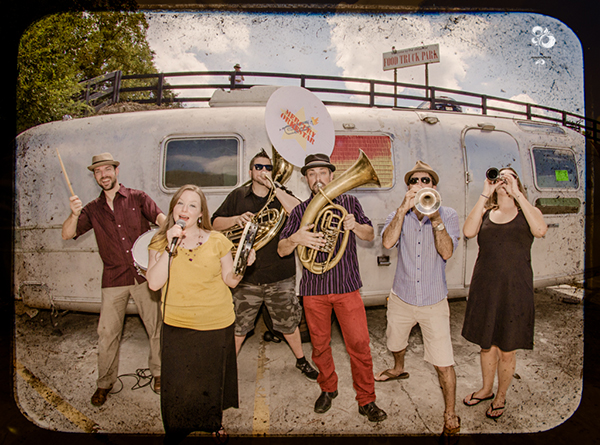 Mercury Orkestar is on a mission to connect people through music. Inclusive shows bring together the worlds of brass band, Balkan music, pop and more into a roving all-ages party. From beer halls to concert stages to weddings to back-alley clubs, Mercury Orkestar brings their fiery blend of music to kick off the party.

The band will perform at the Creative Arts Guild on Wednesday, Oct. 2 at 7:30 p.m. as part of Dalton State’s concert series this semester. Admission is $10 for adults, and $8 for seniors over 65. Dalton State faculty, staff and students are admitted free with a Roadrunner ID. For more information, contact Dr. Ellie Jenkins at ejenkins@daltonstate.edu.

Founding members Erik Kofoed, Bill Pritchard, Miranda Dohrman, and Paul Poovey began playing shows featuring Balkan music and Kofoed’s ironically orchestrated rock and pop arrangements. Gradually expanding from beer halls and Oktoberfests, the fledgling Orkestar began spreading their gospel through academic circles, community events, house parties and nightclubs. The Orkestar has played hundreds of shows since their first performance in 2007 and has grown its fan base and renown through grass-roots community engagement, a self-released EP in 2013, and recording credits for national acts.

Their goal is to spread their love and appreciation of brass bands, pop music and Balkan music traditions—all packaged in an all-ages friendly, danceable whirlwind of musical color.