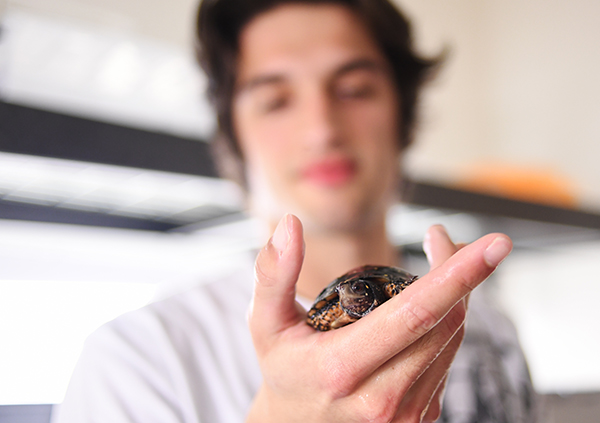 Tyler Fowler never imagined he would have an integral role in saving an endangered species in his freshman year at Dalton State.

A new program on campus, Saving Animals from Extinction (SAFE), gives students another opportunity to help save turtle species. This is the second program at Dalton State geared toward saving endangered turtles. The Turtle Assurance Colony, which partners with the Turtle Survival Alliance, is dedicated to the conservation of species worldwide.

Dalton State partnered with SAFE, which has similar goals to TAC but also includes a survival plan to reintroduce turtles to their natural habitats.

“I was in school for only two weeks before I got involved in this program,” said Fowler, a biology major. “Experiences like these motivate me academically and help me get to know other students who have similar interests. Handling such interesting creatures is also a great way to help me relieve some stress.”

Fowler works intimately with a species called the spotted turtle (Clemmys guttata). He handles these sensitive creatures and collects data that is entered into a scientific database. The spotted turtle is native to the east coast wetlands, an ecosystem that is disappearing due to human interference, said Chris Manis, an associate professor of biology and a research associate who oversees the turtle programs. 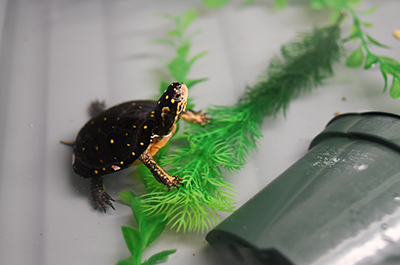 The 32 spotted turtles are quarantined from the 140 turtles across 15 species in the TAC program, most of which are native to Africa and Asia and are disappearing due to poachers. Different students volunteer with each program to avoid cross-contamination.

Although the spotted turtle is protected by state law, poachers capture them and sell them to pet traders on the black market, Manis said.

“I love putting students this close to animals; it creates a new passion for them,” Manis said. “Students carve out time in their packed schedules to come in and care for these animals. They do everything; from feeding, cleaning and keeping the animals healthy to collecting data on their size, mass and shell growth measurements.”

Both turtle programs allow students to be more competitive for internships, fellowships and jobs at places such as the Tennessee Aquarium, Manis said. 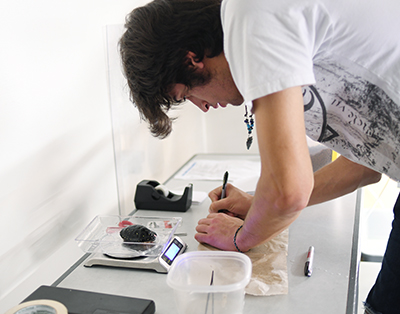 “The Tennessee Aquarium brought SAFE to our campus” Manis said. “What’s different about SAFE is it takes the necessary steps to place these animals back into their original habitat. Once these animals are captured, SAFE creates a survival plan with a purpose - to introduce the animal and the animal’s DNA back into the system.”

Students like Fowler not only play a huge role in this survival plan but also engage in DNA identification of these turtles by collecting tissue samples, Manis said.

“The lab that analyzes the data only needs a small skin tissue sample, usually taken from the tip of the tail,” he said. “We take the samples on campus and send them to the lab. The lab has a huge database that includes DNA samples from spotted turtle populations across the U.S. Our samples are compared with existing samples to find similarities. The samples with the greatest similarities to ours help indicate which population these animals might be from.

“While these animals are in our care, we would like to study their breeding habits and encourage reproduction” Manis said. “Some are involved in typical breeding practices now but are not yet mature enough to know why. Soon, I hope to microchip them and introduce them to the outdoor enclosures.”