‘Compete Passionately:’ Serbian Native an Asset to No. 6 Roadrunners 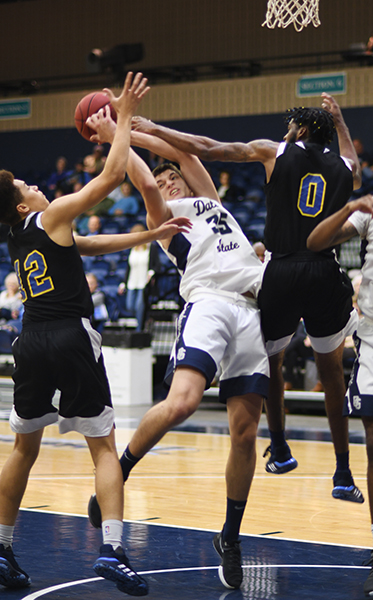 Igor Stokic left his parents and his home to move to a larger city at 15 for one reason: basketball.

It paid off for Stokic, as well as Dalton State. The 6’7 forward and sophomore Roadrunner from Serbia has contributed significantly to the No. 6-ranked basketball team’s 18-1 season. The Roadrunners are on an 11-game winning streak heading into Saturday’s match against Martin Methodist College in Pulaski, Tenn.

“Igor’s humility, work ethic and passion are very rare in young people,” said Coach Alex Ireland. “There is no job too big or too small, and nothing that he won’t do to help his team win. He has had notable performances, such as his 22-point, 15-rebound game against Shawnee State, but he also provides a great deal that does not show up in statistics, such as diving on the floor for a loose ball.”

The next chance to see Stokic play at home is during homecoming week with a matchup against Stillman College on Thursday, Jan. 30 at 7:30 p.m. The homecoming game is Saturday, Feb. 1 at 2 p.m. against Mobile University. Both games will be played in Bandy Gym, a homage to the original Dalton Junior College basketball team who won so often the gym became known as “Death Valley, GA 30720.” Tickets are $5.

“When the lights go off in the arena, and the announcer calls your name, it’s the most amazing feeling,” said Stokic, a business management major expected to graduate in 2022. “I love playing in front of these fans and community. They stay after the game and are always there for us. We owe a lot to this community. That’s why we like to come here and play and fight for every single ball.”

Stokic says the team’s competitive spirit is driving the winning season. Even after the season’s single loss, the Roadrunners’ drive didn’t wane.

“We compete passionately,” he said. “We never give up. We work as a family. We do not take anything for granted. It’s about the adventure, how you get to a place. So every day we compete at the highest level, enjoy time with our friends, and be part of the Roadrunner community and family. No one in Roadrunner Nation should take that for granted.”

Stokic moved to Belgrade from his hometown of Ruma alone so he could play basketball. At 18, he left his home country for the United States to finish his high school education in Pennsylvania. 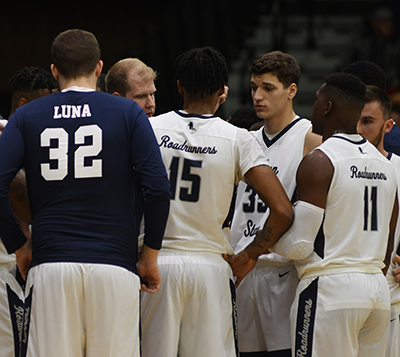 “When I turned 18, I had a choice to either quit school and pursue basketball or enroll in college and be done with basketball,” he said. “I love the game, and I couldn’t imagine myself being out of basketball at 18. I knew I had so much more to give to the sport. Scouts in Belgrade spoke to me and my family, and we came to the conclusion that moving to the U.S. was the best thing for me. It is the only country where you can play sports and continue an education.

“Basketball had already given me the opportunity to go to the capital of Serbia and live there and go to school there,” Stokic said. “I became independent and more mature. It gave me insight into real life. When the time came to choose a college, I knew Dalton State would be the perfect place for me to grow up as a young man and improve my basketball skills and myself in every aspect of my life.”

Stokic balances being a student, an athlete and an on-campus part-time job. He attributes his time management abilities to the education system in Serbia, as well as the years he lived alone in Belgrade.

“It’s difficult, but you have to be independent,” he said. “I have worked hard in the classroom since day one. My parents taught me one of the most important things in life to have is an education.”

One of Stokic’s reasons for choosing Dalton State is its Association to Advance Collegiate Schools of Business accreditation, which is earned by less than 5% of schools worldwide.

“Once I earn my degree from this school, I can go for big things in my life,” he said.

Stokic hopes to return to Europe to play basketball professionally but has plans to earn a master’s degree whether he achieves professional status as an athlete or not. He is intrigued by the idea of owning his own business and believes his experience in different cultures is setting him up for success in this global economy.