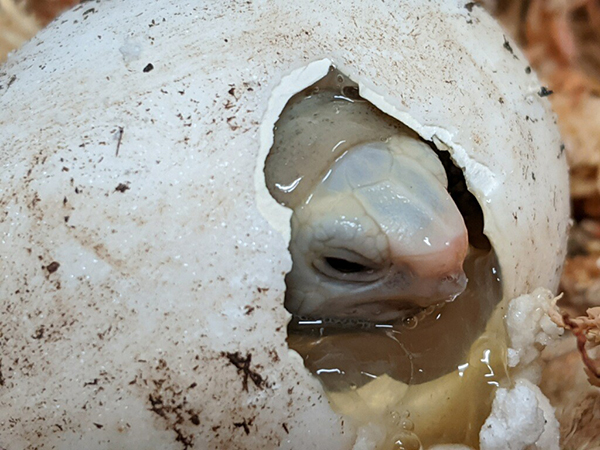 An elongated tortoise, Indotestudo elongata, hatched this week making it the third species to successfully breed in captivity at the college. The college’s TAC was one of the first organizations dedicated to saving endangered turtles worldwide to successfully breed serrated hinge-back tortoises, Kinixys erosa. There has also been a lot of success breeding Home’s hingeback tortoises, Kinixys homeana.

TAC volunteers have seen several eggs from the elongated tortoise over the last couple of years, but none of the eggs were viable. Seeing several clutches of nonviable eggs before seeing hatchlings is emerging as a pattern for these endangered species, said Chris Manis, an assistant professor of biology and research assistant at the college who oversees TAC.

“You get these animals, usually as an adult,” Manis said. “You try to settle them down, alleviate their stress, give them really good husbandry for a protracted amount of time, make everything comfortable for them, make sure the temperature and humidity are how they need it. You do everything right. And you’re patient. At first you won’t get anything. The males are trying. They have issues with sperm production due to stress. The females are laying eggs but they’re not viable. And that’s a step in the right direction. Stress in turtles is not dissimilar from how stress affects us.”

The elongated tortoises had laid two clutches of eggs recently, but it became clear most of the eggs were not viable early on. They were small and the color of their shells was off. Manis wasn’t sure the larger egg would be viable, but when he checked the incubator this week, a turtle had popped its head out of the shell. It can take several hours for a turtle to fully hatch.

Turtles in the TAC are endangered because of humans, and that is especially true for the elongated tortoise that would be found naturally in several countries including China, Malaysia, Vietnam, Thailand, India and Nepal. Humans are destroying habitats and consuming turtles. The elongated tortoise populated most of Asia’s tropical deciduous forests as recent as 20 years ago, he said.

“Elongated tortoises are the poster child for what’s happening in Asia when it comes to eating animals,” Manis said. “This species was common, but has been nearly eaten out of existence. Previously, Asian box turtles had been captured for eating, but when they became scarce, people turned to the elongated.”

Elongated tortoises are not popular among organizations that encourage breeding in an attempt to save these species from extinction due to their size and need for a tropical environment. Dalton State is able to provide these species a suitable habitat in a greenhouse that was built thanks to a donation from the Mashburn Trust and local philanthropist Jeanne Burr, who died in May.

“The elongated tortoises don’t get as much love as they should,” Manis said. “They’re not convenient for husbandry and breeding unless you have the facilities for it. We’re grateful we do. The elongated tortoises are more personable than other species. They’ll come to you like a puppy looking for food once they’re habituated to you. Some of the other species are shy and will hide. But these have a big personality.”

The college houses approximately 150 turtles across 15 different species. A few other species have laid eggs, and Manis said he believes they are close to successfully hatching spiny turtles, Heosemys spinosa. The eggs are viable, but so far, the turtles cannot survive the hatching process. Other species are laying clutches of eggs that are not viable, which points to the early stages of successful breeding.

The turtles are cared for under the direction of Manis by other faculty members and students. They provide husbandry experience that has led students to land prestigious internships, research fellowships and positions. They also provide numerous opportunities for undergraduate research.