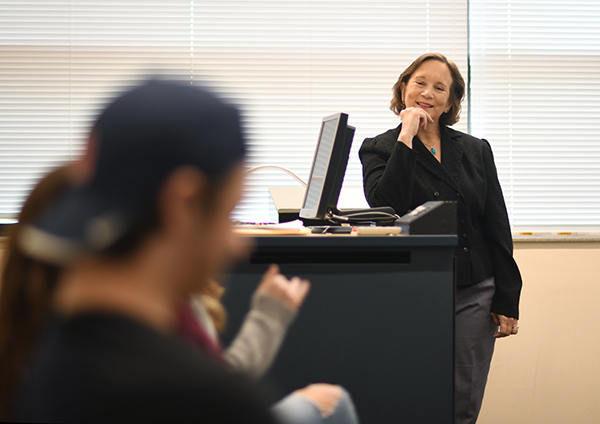 A sign for a bait shop with a tanning salon sparked an idea for Dr. Barbara Tucker.

It made her think of the absurdity of reality TV, which prompted her to pen a new play, “The Foark River Tanning Salon and Baitshop.”

“All of my works start with an image,” said Tucker, an author, professor and chair of the Department of Communication, Performing Arts, and Foreign Languages at Dalton State College. “That sign made me think of those ridiculous TV shows, and I started thinking of ways to parody them through that shop.”

The play will be performed from Nov. 10-14 at 7:30 p.m. in the Goodroe Auditorium on the Dalton State campus. Masks are required and seating will be spaced to allow for physical distancing. Tickets are $8, and free for those with a Roadrunner ID.

Tucker has published seven novels, runs two blogs and has written plays. In 2015 her play, “Long Lost Relatives,” was performed by the Dalton State Theatre students.

“Seeing people perform your own literature is amazing,” she said. “It feels so rewarding to watch as the audience responds to things that you wrote.”

The play is a parody of reality television, especially that of the mid to late 2010s. The plot involves the owner of a rundown bait shop and tanning salon who wants to turn the business into a reality TV show, much to the joy of some staff and the annoyance of others. The play makes jokes about the common tropes and ridiculousness of reality TV. After watching some of the shows, Tucker began to notice recurring patterns and increasingly absurd ideas she felt would make for a great comedy.

Tucker hopes the play will offer a chance for people to laugh and have a good time, especially during the seriousness of the pandemic and current social climate. She says there are no deep meanings or messages hidden in the play; it’s just meant to be fun.

This play also is a chance to show that even during this pandemic, students still create and perform, Tucker said.

“The arts are not dead,” Tucker said. “They are still alive and well.”

Precautions are being taken both on and off of the stage. Actors will be wearing clear specialized face masks that allow their expressions to still be visible.

Tickets can be purchased through eventbrite.