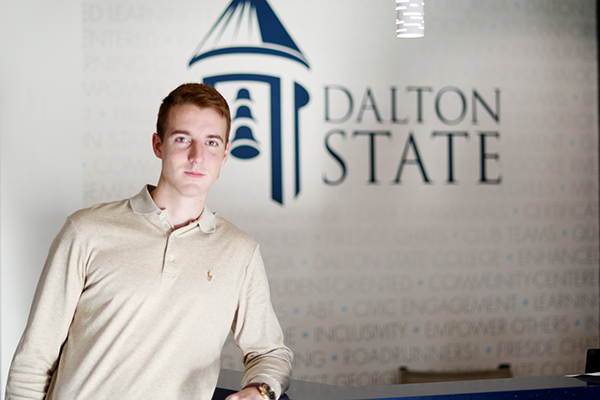 Though it was tough, he excelled. The finance and applied economics major at Dalton State added extra summer classes and landed an internship to help him meet his career goals while passing the months alone.

He was one of only about a dozen students who lived in on-campus housing through the summer in 2020. All others had gone home because of the global pandemic.

Ackander is an international student from Sweden. Going home was a huge risk that he didn’t want to take. He wasn’t sure when he’d be able to fly back to the states to return to school because of all the unknowns surrounding the pandemic, and he didn’t want to delay his college education.

So, he stayed, and instead immersed himself in classes and his internship. Instead of taking two courses as he had planned, Ackander signed up for five.

“I’ve learned a lot about self-discipline and how to focus,” Ackander said, as he reflected on the last year. “It’s much harder to focus with online classes. I am still struggling with some of that, but I’m working hard in my classes and understanding my goals. It has been a time to self-develop and grow as an individual. This pandemic has allowed that to happen.

Ackander originally came to the states to play soccer for a junior college but transferred to Dalton State in the fall of 2019 to play soccer as a Roadrunner.

He has emerged as a leader both on and off the field. He now works as a resident assistant in Mashburn Hall where he makes meaningful connections with his residents, said Tim Reilly, director of Residential Life. More than half of the residents on Ackander’s hall have already signed up to live in Mashburn again next year because he provided such a positive, engaging experience for them through the pandemic, Reilly said.

“Fred is a mature student,” Reilly said. “He is bright, and over the summer we chatted quite a bit. I was able to bring him on staff this fall as a resident assistant. I knew if he was mature enough to handle being by himself the way he did, he could mentor other students when we opened back up to the rest of the population.”

Some students in Mashburn didn’t have a place to go when the pandemic began in March of 2020, others were international students who didn’t want to risk closed borders when the time came to return to classes in the fall.

“It was tough for them when their community left,” Reilly said. “They had each other. But they went from having 300-plus students to having about a dozen. I knew I had to figure out some way to make sure we knew what was going on with them and that they had social connections.” 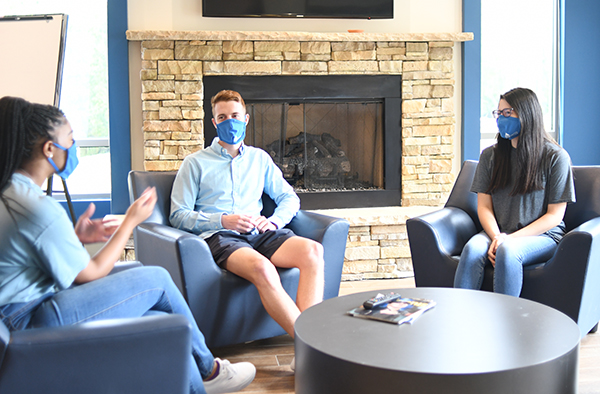 Reilly helped his residents connect through a messaging app. If someone was headed to the grocery store, they would offer to pick up items for other students. Or if someone needed a ride but didn’t have a car, they could use the app to ask for transportation.

“Tim has made this entire pandemic easier,” Ackander said. “Especially when the pandemic first began last year, he made sure we had a good experience and didn’t panic. He kept everyone calm and tried to make it as pleasant as possible. He continued to reassure us all year.”

When campus reopened in August – with masks and social distancing protocols in place – the challenge was to continue engaging students at a distance. Mashburn began hosting drop-by events and more virtual events to replace the in-person social gatherings typically hosted inside college residence halls.

“We found safe ways to remain socially distanced,” Ackander said. “There are plenty of factors that helped make this experience positive rather than negative. The people at Dalton State were there if I needed anything at all.”

Ackander is glad he remained at Dalton State during the pandemic. He returned home for Christmas 2020, and it was the first time he’d seen his family in a year.

The college provided Ackander support and encouragement. As a student athlete and a resident assistant, Ackander said it can be hard to prioritize his time. Taking so many classes in the summer meant he didn’t have to take 18 hours in the fall or spring and had more time for his other responsibilities.

Soccer season was delayed to spring this year because of the pandemic. The Roadrunners are ranked No. 6 in the country and are the Southern States Athletic Conference regular season champions. They advanced to the conference tournament championship game, but it was canceled Friday due to inclement weather. The Roadrunners will play in the NAIA National Championship tournament. Ackander was named to the First Team All-Conference, to the Men’s Soccer All-Tournament Team and to the Barnes & Noble College All-Academic Team.

Because of the pandemic, the National Association of Intercollegiate Athletics is extending an extra year of eligibility for each player. Though Ackander could have taken the classes he needed to graduate this semester, he plans to stay through the fall to play one more year of college soccer.

Ackander hopes to remain in the United States after graduation in December. He wants to find a job in the finance field, preferably as a financial planner.

“I am not done with the United States yet,” Ackander said. “There are so many opportunities here, and I am not done exploring”