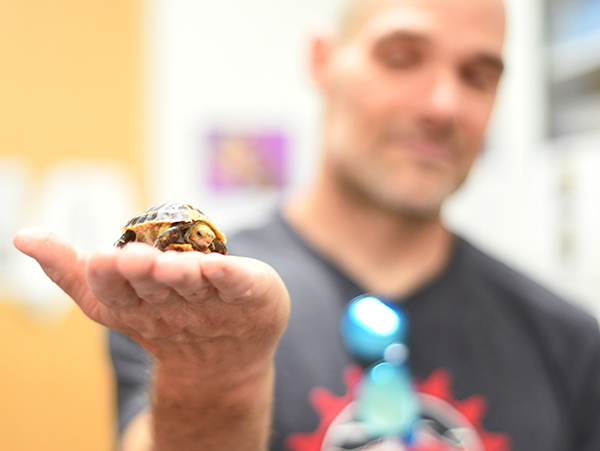 A Forsten’s tortoise, Indotestudo forstenii, hatched last week making it the fifth species to successfully breed at the college.

“It is not common to breed this species in captivity, but it has been done,” said Chris Manis, assistant professor of biology and research associate who oversees TAC. “Success for this species is spotty in captivity. The good thing is, now we know this male and female are fertile.”

Forsten’s tortoises do not herd well together so they can only be placed in the same enclosure short term for breeding making it even more challenging to successfully breed the species. Two of the females laid eggs last year, but none were viable. This year one of the females laid three eggs, one of which was viable.

“Three eggs are a lot for her to have laid,” Manis said. “It was obvious pretty quickly one was not viable. The other two looked good. Then the one pipped last week. It was really great to get one to hatch. And now I feel better about trying to pair the male up with the other females.”

Forsten’s tortoises are native to the Sulawesi Island of Indonesia and other nearby islands.

“People in other cultures eat turtles at a higher rate than they can repopulate, and humans destroy their habitat,” Manis said. “Now, add to that their extremely limited range, and that’s also what led to the drop in population. This species is so rare that they are now high end on the black market.” 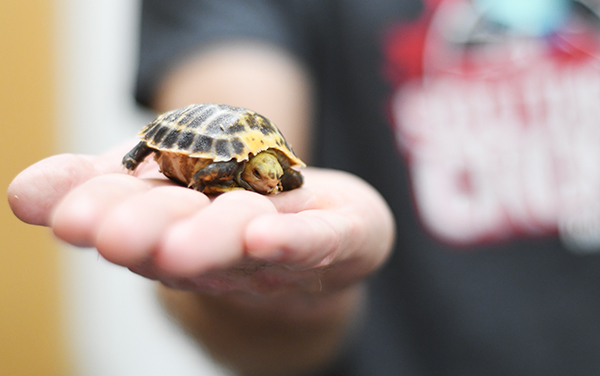 At one point the species had been rediscovered in the wild, but they were harvested quickly, he said.

The species is a tropical forest turtle that thrives in heat and humidity, and they are omnivores.

Other species that have been bred in the TAC are the elongated tortoise, Indotestudo elongata; serrated hinge-back tortoise, Kinixys erosa; Southeast Asian box turtle, Cuora amboinensis; and the Home’s hingeback tortoises, Kinixys homeana.

Dalton State is home to approximately 150 turtles across 15 different species. Students are responsible for husbandry duties, such as feeding the turtles, cleaning their cages and checking their shells and bodies regularly to ensure their health. This gives them hands-on experience handling and caring for animals that has led several students to obtain internships and jobs at aquariums and zoos.