Dr. Kris Barton had a keen ability to see people’s strengths and the positive influence they were making on Dalton State’s campus.

He never hesitated to encourage and compliment that strength or positive influence. It left those around him feeling appreciated and noticed.

It’s how Barton led in his role as chair of the Department of Communication. And it’s how he taught in the classroom.

Barton died unexpectedly this week, leaving the Roadrunner community in mourning just days before graduation. He was 39. He leaves behind a wife, Gina, and son, Wyatt, in addition to hundreds of students, faculty, and staff who admired and respected him.

“Kris was one of those extraordinary individuals who simply radiated excellence,” said Dr. Mary Nielsen, dean of the School of Liberal Arts. “He took the time to make the faculty and staff feel appreciated and valued. He publicly recognized the contributions and success of others. As one faculty member mentioned recently, Kris had a ‘tendency to catch one doing something right and then bring it to that person’s attention.’ Thoughtful, good natured, patient, and approachable, he was everything one could ask for in an administrator. He led by example, had a delightful and sometimes quirky sense of humor, and was a productive scholar and outstanding teacher. His work—and success—with student research was inspiring. Our loss is simply too great.”

Barton pushed students to do their best, gave them opportunities to publish and present their research at conferences, and served as a mentor.

Meagan Standridge, who graduates Saturday with a degree in interdisciplinary studies with a concentration in communication, has a paper being published in an academic journal thanks to Barton. 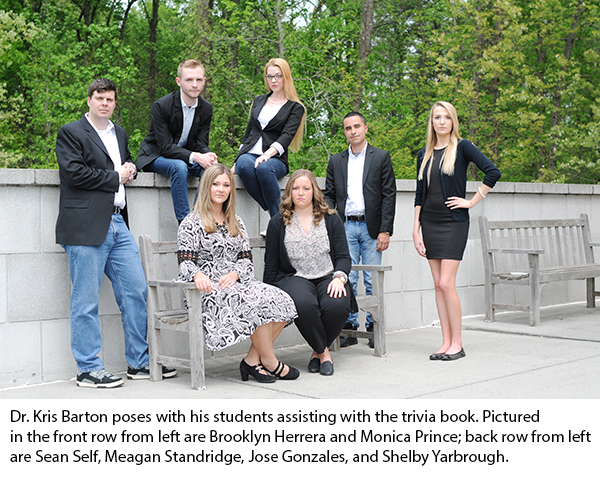 “Dr. Barton was a tremendous influence on me,” said Standridge. “I want to be like him one day – teach and find the strengths in each student and foster that. When he handed back one of my papers I was excited to see the red marks because I knew it was beneficial constructive criticism that would help me grow.”

In 2013, he received the Dalton State Foundation’s Award for Faculty Excellence in Scholarship. He was known for his research on mass media’s influence on society, but also his love for TV and movies. He had published and edited many books and articles about different aspects of the media’s influence on people.

Jerry Drye, associate professor of communication and friend of Barton’s, had worked with him for the last seven years. Three of those years was with Barton serving as communication chair.

“If you were building the perfect prototype in a lab, it would be Kris Barton,” Drye said. “He was a wonderful teacher in the classroom, a great supervisor, a good friend, a good family man. He figured out how to have a good balance of work, family, and self-care that so many of us strive for. He had such a passion for his work. He grew up in a time when people watched a lot of television. He went from being a consumer of it to being a real analyst of it. He wanted to know, ‘what is it about TV that draws us in? Why do we want to watch these people put on a show for us?’ He immersed himself in it. He loved science fiction and trivia. He cared. He cared deeply. He wasn’t just going through the motions of life. He continued to grow and learned a lot.”

At the time of his death, Barton was working with six students he selected on a trivia book to commemorate the College’s 50th anniversary. Barton also organized a trivia fundraiser for the Department of Communication. 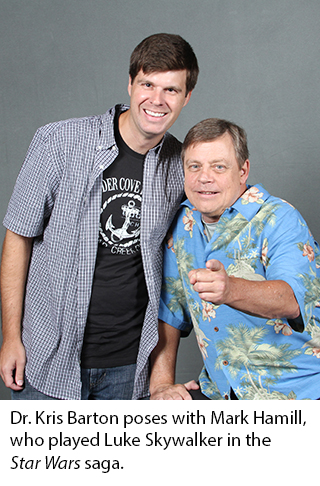 Barton sought out Jose Gonzales, who graduates this semester with a degree in psychology, and asked him to consider taking the course and helping with the book.

“Most of the people in that class were communication people and had taken several courses with him,” Gonzales said. “I had only had one. I don’t know how he saw that I would be an asset to the book. None of us in the class except Dr. Barton had any experience publishing. He led us through the process and taught us a lot as we went. He was quick to give us encouragement and make it a team effort. I think the focus of the book will shift and will be dedicated to him now. We’ll have to add something more about Dr. Barton. He hadn’t meant for this to be his last project. He mentioned wanting to work on more similar to this.”

Dr. Margaret Venable, president of Dalton State, quickly recognized Barton as a leader among the faculty when she came to campus.

“He was well respected by students and his peers as an excellent teacher, scholar, department chair, and friend,” she said. “Most recently I asked him to serve on the search committee to identify our next vice president for Academic Affairs. I chose him thoughtfully because I wanted someone who had the respect of his colleagues and would devote the care and attention needed for such work. He did not disappoint me. The loss of our friend Kris has left a tremendous void at Dalton State.”

Barton left a void not only at the College, but in the lives of so many he had touched through the years, Drye said.

“If there was a Kris Barton Fan Club, I’d be the president,” he said. “He was a man of great respect, admiration, and adoration.”

Barton wrote in an essay published in the Dalton State magazine in May 2013. It was also the theme of a keynote address given at the Georgia Communication Association’s 82nd Annual Convention and of his Last Lecture.

“Like most people, I’ve contemplated my time on this earth and when I’ll be taken from it, and in looking back, it seems my concerns about death stem from issues of the unknown, but not the unknown of what lies beyond this mortal coil and existential questions on the existence of God,” he wrote. “What I’ve always been worried about is missing out on the media landmarks of our time. My concerns selfishly stemmed not from what happens in the next part of my journey, but what I will miss out on in this one.” 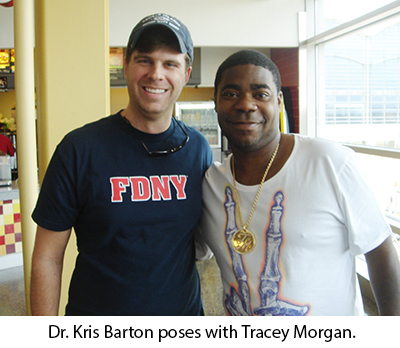 The essay points to his desire to see the Star Wars saga end, the Harry Potter books conclude, and the final season of Arrested Development. He lived long enough to see two of those come to an end.

Though he recognized too much media was detrimental, he argued there is much to learn from the media as well, such as “Talent is luck. The important thing in life is courage.” It’s a quote from Woody Allen’s character Isaac in Manhattan.

“We should all just enjoy the media for what they are and what they do,” Barton wrote. “There are always going to be inherent dangers with anything that’s such an ingrained part of our lives, but failing to look past their faults makes us blind to all the wonderful things they can offer.”

He also pointed toward Tracey Morgan’s character, Tracey Jordan, on the NBC show 30 Rock, who said “Live every week like it’s Shark Week!”