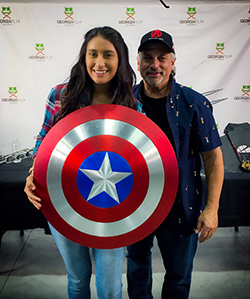 Dalton State is a member of the Georgia Film Consortium (GFC). The Georgia Film Academy (GFA) supports the GFC, which is a unique-in-the-nation, state-wide collaboration of institutions of the University System of Georgia, Technical College System of Georgia and independent institutions that offer professional courses in film, television, digital entertainment, Esports and game development.

Dalton State students who want to pursue a career in the film industry can earn an 18-hour  professional certification from the Georgia Film Academy (GFA) while still enrolled at Dalton State. These 18 hours will apply to the B.A. in Communication or Associate of Arts in General Studies, Film Pathway. The programs are offered in the Department of Communication, Performing Arts and Foreign Languages.

The Georgia Film Academy is a professional organization, a unit of the University System of Georgia, that is committed to leading and advancing the entertainment arts industry and its workforce in Georgia. The GFA promotes rigorous professional training and supports opportunities for union-covered film and television production craft internships and placement in creative industries, apprenticeships and jobs in an effort to build a permanent and sustainable industry in the state. On behalf of the USG, TCSG, and their institutions, as well as private higher education institutions in Georgia who choose to use its resources, the GFA is dedicated to the development of both Georgia’s workforce and the industry that will utilize it.

As a Dalton State student in the General  Film Academy pathway program(s), you’ll have the opportunity to:

You can start these classes in your sophomore year. You will travel to the Atlanta facilities of the GFC one day a week for each semester-long class. The courses offered by Dalton State College are:

The GFC semester schedule follows the eCore Common Academic Calendar. You will also be able to take other classes on campus or online during your GFC semesters.

To enroll in these classes or get more information, contact Dr. Barbara Tucker at 706-272-4411 or btucker@daltonstate.edu.